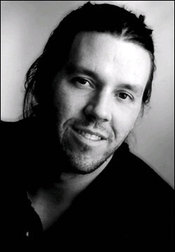 Because of an
incredibly chaotic weekend of torrential rains and flooding–and no Internet
access–I only learned this morning of David Foster Wallace’s death.

Like a lot of
people, I had very mixed feelings about his work. I thought Infinite Jest was
more infinite than jest. Oblivion had some powerful passages, but for the first
time in his work there were clear signs of bluffing. His immense gifts were
probably better suited for non-fiction, anyway.

While his work
struck me as brilliant but uneven, I always liked him, and rooted for him in a
mild and obscure way. I remember a profile some magazine did of him after
Infinite Jest was published. Wallace was still at ISU, where his colleagues
disclosed that Wallace had a not entirely philosophical interest in Bay Watch.
Wallace hotly denied it. But Wallace took writing very seriously. Like
Hemingway and Walter Benjamin, writing had an existential importance for him.
Wallace knew that being a fiction writer in late twentieth-century America was
an absurd existence, yet he went at it like he could change the world. It’s sad, but not entirely surprising, that Wallace’s life would end the same way Hemingway’s and Benjamin’s did.