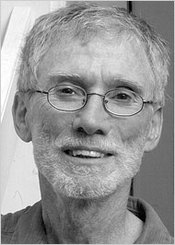 Once upon a time,
Max Apple was part of the post-modernist generation of writers that came of
creative age during the 1960s. The two closest to Apple are Stanley Elkin and
Donald Barthelme. In his high post-modernist fiction, Apple was more buoyant
and ambitious than Elkin and more straightforward than Barthelme. His most
famous story, The Oranging of America, is full of doubt directed at the
contemporary world of goods and services and at the founding fathers of that
world, represented by Howard Johnson, who Apple depicts as the benign creator
of twentieth-century American popular culture. Johnson is post-industrial god
of creation, exploring and naming an unspoiled country, reveling in
industrialism’s partial reach. But for all its complex ironic postures and
indiscreet artificiality, Apple’s vision is primitivist in its faith in the
originating gestures of American individualism.

Howard Johnson,
Apple’s infantile god, reigned over a world in which it was still possible to
take antic pleasure out of the sheer abundance of post-war American culture. In
his new collection of short stories,

In his new collection, The Jew of Home Depot and Other Stories,
however, Apple’s entrepreneurs are petty retailers and desperate traders in
junk. The old monomania that made Howard Johnson such a potent cultural
figure–in Apple’s fictional America, at any rate–has become little more than
the dogged pursuit of self-actualization.

This drastic
reduction in mock heroic scope is largely attributable to its author’s
maturity. Apple was always the most forgiving of the high post-modernists, and
his humane warmth is evident everywhere in this collection. Apple doesn’t seem
much interested in reviving his familiar post-modernist tropes, the best
example of which is the story "Free Agents," in which a man’s bodily
organs rebel against him. So don’t expect the same dual ironies of
post-modernism–at once distancing and celebratory. There’s still irony in
Apple’s work, but it’s of garden variety sort of wary realism.

The last vestiges of
Apple’s old post-modernism can be seen in his monomaniacs: a woman who wants to
marry Yao Ming, a teenaged girl obsessed with shot putting, a 46-year-old
single man who decides he wants a family, right now. Once upon a type these types
would be fertile ground for comic riffing; Stanley Elkin made his whole career
on just this type of mockery. But with YouTube a giant repository of small-bore
obsessions, monomania isn’t so funny anymore. In fact, it’s kind of banal and
sad–and so are Apple’s obsessives. In the 1960’s these characters–Howard
Johnson is the archetype–dramatized the novel’s old conflict between freedom
and commitment. In "Yao’s Chick," Li En, a Houstonite who suddenly
decides Yao Ming is the key to some hybrid identity, stages one of the least
dramatic rebellions you’re ever likely to read about in contemporary American
fiction. You get the sense that what she really needs isn’t a giant basketball
player but a few salutary episodes of The View. Ferguson, the eager would-be
father, is supposed to be passionate, but he comes across as irritating. At one point a small boy steps forward to
tell him as much.

Apple’s expansive
spirit makes us care about what happens to these people, and he asks us to
accept them. However, because his characters tend to be fictional conceits, we
have little else to do as readers than agree or disagree. We get the same
gesture over and over again, executed with varying degrees of finesse: a deeply
faulty character, confronting mortality, needs to be accepted. It’s a pleasure
to grant this acceptance, but Max Apple used to give us something else besides
sympathy. David Green at the Reading Experience makes an interesting
observation about the stories in Apple’s latest collection: "too many
of them could have been written by other, ordinarily talented writers, and I
had not previously thought of Max Apple as an ordinary talent."

It’s good to have Max Apple back, but I miss some of the buzzing dissonance of his earlier work.