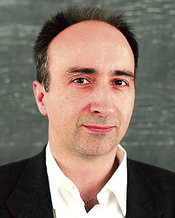 About once a month for the past forty-five years someone has published an article announcing the terminal decline in reading. However, for several months now I’ve been taking a non-scientific survey of reading habits of people on the CTA’s Purple Line, which runs from my home town of Wilmette, IL, through the university town of Evanston, down through Chicago’s affluent North Side, to the Loop. I can say that more people read books than listen to iPods: in the afternoons especially there are twice the number of readers as listeners. (People who do both count as readers.) I see the usual selection of genre fiction: James Patterson novels, mysteries, Khaled Hosseini, and something best described as religious romance (sample title: He’s Fine, But Is He Saved?) But I also see a surprising number of people reading serious fiction. One young woman boarded the train near Northwestern University every day lugging a volume of the collected novels of Jane Austen. It took her all summer to get through the volume, but she did it. Thomas Hardy has a following among twentysomething white and African-American women. Chuck Palahniuk and Dave Eggers are popular among young men. Recently I’ve seen people reading Junot Díaz, Jhumpa Lahiri, Denis Johnson, and Per Petterson.

These people read fiction for pleasure. Can their reading experiences be enhanced by a good teacher? Do they need to be? In my experience, these kinds of questions are more acute in film studies than literary studies, but even English, an established discipline, has to ask: Other than exposing readers to the canon of English-language literature, what function does the formal study of fiction have? English departments across the land continue to struggle with this question–now more than ever.

. And make no mistake about it: fiction works by conveying a sense of reality. Realism is the novel’s "central reason for being," declares Wood. Perhaps because of this belief, Wood finds no reason to provide a history of literary realism. But he knows when novelistic prose works, and he’s excellent at showing us when it does. He can’t get this line from Marilynne Robinson’s Gilead out of his head: "My grandfather’s grave turned into the light, and the dew on his weedy little mortality patch was glorious." One of the pleasures in reading literary criticism is reading a critic in love, and Wood loves fine writing. Few working critics are better at close reading than Wood.

Wood is famous for two glaring limitations: he only likes classical realism, and he’s never entirely warmed to American literature. (Wood is an Englishman living in the US, teaching at Harvard and writing for The New Yorker.) Thus, his newfound enthusiasm for Saul Bellow in How Fiction Works is both surprising and somewhat puzzling. Wood hails Bellow as "one of the great stylists of American prose."  This claim is debatable, as is the whole practice of isolating prose style as a signal quality of novelistic quality. I recently re-read Herzog and was struck anew at how great a writer Bellow was. Some shining passages popped up here and there–a description of factory smokestacks in winter was a pleasing turn, but also self-consciously writerly, something to hold our interest as Bellow moves Herzog down the street. But mostly what I read Bellow for is the tension between mid-century intellectualism and the immersion in urban American reality.

Every critic has his limitations and his blind spots. Wood’s general deafness to the harmonies and dissonances of American narrative prose has nothing to do with being British; one of the most sensitive readers of American literature we have is another Brit, Tony Tanner.  How Fiction Works is the best primer on the basics of narrative prose available outside academia. But fiction also works on a level beyond character, plot, and language. It’s one thing to explain how a Jane Austen novel is such a rich reading experience. It’s quite another to explain why someone would dedicate a whole summer to reading her collected works.

Unlike Roland Barthes, who is partly an inspiration of Wood’s book, Wood doesn’t have any larger intellectual project in mind when he reads. The arguments he advances are hardly ground-breaking: that Flaubert is the father of the modern novel, that Updike’s Terrorist is a bad piece of free indirect style. Of course, Wood probably wouldn’t have been hired by The New Yorker, or become one or two of the most widely read literary critics in the US if he had a critical program as sophisticated as Barthes’.

But I think every serious reader, tutored or untutored, reads with a larger intellectual schema in mind. We chose a certain range of novels for reasons that can’t be entirely explained as matters of taste. We read fiction to find the answers to hugely complex questions about our real lives. Wood is very keen on the novel’s claim to realism, but he’s too much of a classicist to reflect on the larger dimension of fiction reading.Wood ably explains how fiction works, but not why it works.