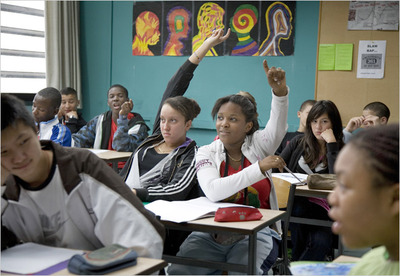 Whenever a film seems to be bursting with plausible yet insubstantial
details and the characters appear like they could suddenly exit through
the nearest door and never be seen again, we say the film is
documentary-like.  On such film is Laurent Cantet’s The Class,
with the down-to-business title we’d expect from a documentary and
picturesque subject matter: a Parisian junior high school class of
African, Arab, and Asian kids. The kids have the same "I’m going to
bored no matter what happens" look you’d find in your local junior high.
The first irony is that their listless presence is meant to shock the
film’s viewers into paying attention: these are the faces of the French
Republic, circa 2020. Cantet trained three high-definition video
cameras on his classroom of non-professional actors, catching their
every flicker of self-consciousness. The detached scrutiny of Cantet’s
cameras is analogous to the panoptic control the students will face
throughout their lives as they negotiate their ways through an EU
economy and a distrustful indigenous population. Tellingly, the title
of the François Bégaudeau novel from which the film is adapted is Between the Walls.

The
Class won the Palme d’Or in Cannes and led off the New York Film Festival because Cantet’s film succeeded in evoking its
audience’s sympathy while reassuring them that Gallic order is still in
place. There’s a tradition of European films about surely but basically
decent underclasses, hemmed in by calcified national traditions rather
than any specific socio-economic interests of the middle classes. In Mathieu Kassovitz’s La Haine (1995), for instance, there’s only one direct confrontation between the
classes, and that’s between the film’s anti-heroes and a snooty art
gallery owner. Cantet stages an indirect confrontation between his
immigrant children and the Parisian bourgeoisie. The film is set in a gentrifying neighborhood on Paris’s western edge. The setting comes with a ready-made dramatic conflict. With the sight of the first Hermes scarf we know what kind of world these kids live in, and what’s stacked against them.

In this way, The Class shows the limits of the documentary asthetic in a fictional film. Unlike a novel, which can lavish pages of descriptive details establishing a particularized world, films have to create their worlds in the opening scene. Despite the photo-realism of the cinema, its worlds are often generic in every sense of the word.