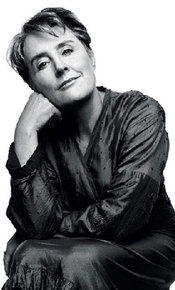 If I were to start
blogging with a new subject–a not altogether remote possibility, since this
blog can’t go on forever–I would blog on cooking. I’ve been cooking with
seriousness, if not always high accomplishment, since my graduate student days.
In fact, around this time of year, when grad students start bracing themselves
to confront the dismal job market for English doctorates, the feasibility of
opening a restaurant starts to get kicked around. We even got so far as to
discuss cuisine choices: my ideas were Chicago-style pizza place or a genuine
Mexican restaurant, neither of which existed in Philadelphia at that time. A
philosophy student from Hamburg, Germany, was a brilliant baker. A Shakespeare
specialist from Connecticut knew a lot of Greek recipes. Since none of the
Victorianists could cook worth a damn, they were appointed waiters and
hostesses of our imaginary restaurant.

Only one person I
know of was crazy enough to actually turn a collegiate enthusiasm into an
actual restaurant: Alice Waters, the impresario of Chez Panisse in Berkeley,
California. "Owner" is not entirely accurate, since she’s never been
a majority owner of the restaurant. "Chef" isn’t quite right either,
since she never cooked there for any extended period of time. In fact, as we
learn from Thomas McNamee’s book, Alice Waters and Chez Panisse

, now available
in paperback, there’s a dispute about how much Waters is actually
responsible for the restaurant’s success.

Waters was a
waitress with a French degree from Berkeley when, one day in 1971, she gathered
together her friends and announced she wanted to open a restaurant. Financial
backers, a staff, and a location all fell into place with an ease that is
unimaginable today. Much of what we now associate with the Chez Panisse
revolution in American cooking–a single menu updated nightly, a stress on
high-quality ingredients, an almost minimalist approach to food
preparation–was in place from the opening night, largely because the Chez
Panisse was essentially an extension of Alice Water’s home kitchen.

Chez Panisse was
every serious home cook’s dream restaurant. It’s now generally regarded as the
second best restaurant in the country, after the stupendously expensive, but
supposedly quite tasty, Alinea in Chicago. In its early days, however, Chez
Panisse was a hangout for Berkeley faculty and drug dealers. The restaurant
lost loads of money, partly because the drug dealers were served free meals,
and partly because the staff robbed the place blind. Waters was blithely
unconcerned, flitting about the dining room pouring free champagne and
inspecting the baseboards for dust.

Chez Panisse gained
a national reputation in the mid-1970s thanks to the cooking of chef Jeremiah
Tower, the first person on the staff who could claim any sort of professional
training. Tower brought a depth of knowledge about French cooking that Waters couldn’t
match. Unfortunately, he also brought a California-sized ego and a
Columbia-sized cocaine habit to the restaurant. Plus, he was developing a
highly refined Parisian style of cooking just as Waters was getting serious
about local sources for ingredients and developing what came to be known as
California cuisine. Waters won that battle, and pretty much every other one in
the long history of Chez Panisse.

The confrontation
between Waters and Tower is the dramatic high point of McNamee’s narrative. The
conflict also reveals how the staff viewed Waters: Some days she seemed like a
visionary genius bent on changing how America eats; other days she seemed like
a meddlesome busybody with a talent for arranging salad greens. McNamee makes a
very good case for the former view, but even he struggles at times to make
Waters cohere into a compelling figure. Supposedly Waters has completely
exteriorized her life: her work is her inner life. Still, in McNamee’s account
and other interviews I’ve seen with Waters, she really only comes alive when
talking about, or to, vegetables.

Waters is now a
global do-gooder; she’s not very much involved in the day-to-day operations of
Chez Panisse. Although many people have contributed to the success of the
restaurant–the only one Waters has ever been involved in, by the way–Waters’
contribution to American cooking is undeniable. After Julia Child, she’s
probably the most influential figure in American cuisine. And if you’re not
lucky enough to get a reservation at Chez Panisse (being a drug dealer won’t
get you priority seating any more, in case you were wondering), then read Thomas McNamee’s excellent
and highly readable account of the restaurant that changed how America eats.