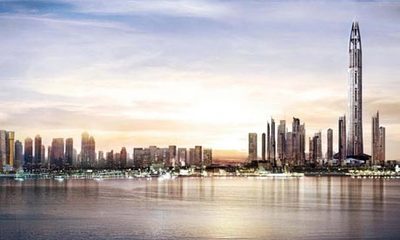 Just as Adrian Smith
predicted,
the Burj Dubai, a dwarfish 818 meters (2683 feet) tall , hasn’t even been
completed yet, and already plans for a taller building have been drawn up.
Developers in Dubai have
announced their intention to build a one kilometer high tower (3,281 feet
straight up). Announced the day after world
markets dropped about a kilometer in value, the announcement seemed timed
to poke a thumb in the eye of battered Western bankers and investors, not to mention worried homeowners across the United States. The
building will be 200 stories high and house 100,000 people. Chris O’Donnell,
the Australian CEO of Nakheel, which is developing the project, informs us, "We are pushing the
boundaries of sustainable design." Sustainable in what sense? Sustain a
straight face while talking about it?

According to
Nakheel’s website,
the tower’s design will incorporate "elements from great Islamic cities of
the past – the gardens of Alhambra in Spain, the harbour of Alexandria in
Egypt, the promenade of Tangier in Morocco and the bridges of Isfahan in
Iran." Trying to make sense of this pretentious mishmash of design
elements is Woods Bagot, a firm based in Adelaide, Australia. The Nakheel
project hasn’t made it to the Woods Bagot website yet, but
the press
photos make it look thrillingly vulgar in the Dubai tradition. Evidently
the design tries to use the fractal geometry characteristic of Islamic
architecture, which lends itself well to the brute repetition of a supertall
building. After dark, however, the tower loses its inhibitions, becoming a
diorama of reptilian menace and F/X silliness. If this building ever gets
built, don’t be surprised to be greeted at the door by Jar Jar Binks.

I don’t suppose
there’s any use in protesting the grotesque wastefulness of the Persian Gulf
supertalls. More
are on the way, funded by a bubble in the world oil markets. However, the
United Arab Emirates is burning its candle from both ends. Sultan Ahmed Bin
Sulayem, chairman of Dubai World, the parent company of developer Nakheel, says
the 1K tower will send "another message to the world that Dubai has a
vision like no other place on Earth." This vision is to be a temporary
home of a globally transient population. As the price of oil rises above $135 a
barrel and stays there, the mobility of the transient population will be
severely hampered. When oil reaches $200 a barrel, as many economists predict
it will eventually, Dubai will be richer, and emptier, than ever.