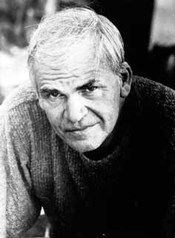 The New York Times reports
that someone from something called the Institute for the Study of Totalitarian
Regimes discovered that in 1950 Milan Kundera, then twenty-one, informed the
police about the location of a defector, Miroslav Dvoracek. Kundera went on to
become an internationally famous writer, while Dvoracek was sent to break rocks
in a uranium mine.

Kundera denies the
allegation, calling it the "assassination of an author." Speaking through his wife, Dvoracek waved
away the revelation, saying it doesn’t matter any more who turned him in to the
police.

Even after 58 years,
the question does matter; otherwise, there wouldn’t be an Institute for the
Study of Totalitarian Regimes, which, by the way, sounds like a fictitious
security apparatus outfit in a Kundera novel. It’s impossible to tell right now if the claims are true. Totalitarian
societies tend to be very good at documentation, but the documents themselves
could be lies. But assuming that Kundera
actually turned Dvoracek in to the police, writing the act off as an act of
youthful indiscretion or naiveté seems insufficient.

Michael Kraus, a
Czech faculty member at Middlebury College, argues that Kundera was "just
simply doing his patriotic duty, as he saw it." In 1950 Kundera was
"a true believer"–as if, under these circumstances, there could be
any other kind. From our perspective in 2008, Kundera believed in a vast
delusion–not the sort of thing one would think the author of The Joke would
do. The discrepancy between a youthful communist fervency and the canny
novelist we know now may cause the greatest damage to his reputation.

But before everyone
jumps on Kundera for these unsubstantiated allegations, it’s important to note
that even if they’re true, the lesson that that experience imparted almost
certainly entered into his fiction. To refuse to read him now would only
compound whatever crime Kundera might have committed. Furthermore, if the young
Kundera couldn’t distinguish between love of country and a political belief
system, we’re hardly any better at making that distinction today in the United
States. A certain governor of Alaska who shall remain nameless is assiduously
working to blur the line between the two.