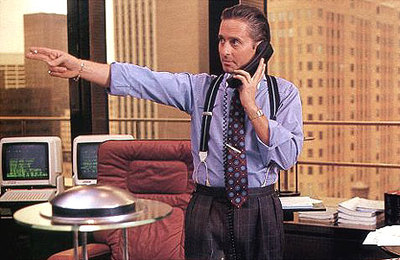 Remember the good
old days when malfeasance on Wall Street could be addressed by slapping
handcuffs on one guy who crossed too many lines? That’s what happened to Gordon
Gekko, the anti-hero of Oliver Stone’s Wall Street (1987) and, indeed, for 1980s Reaganomics in general. Hoping to cash
in on the current downward spiral in the stock market, 20th Century Fox has green-lighted
a sequel to the film, one of the signature filmic texts of the 1980s.
Michael Douglas is said to be interested in signing up to revise his most
famous role.

He should probably
pass. His character would have to be
overhauled far beyond simply losing the suspenders. Bush-era Wall Street is a very different
place than the go-go Reaganomics place. For one thing, there aren’t any more
corporate raiders. Hedge fund managers with obscene bonuses are the closest
Wall Street has to a Gekko-style villain, but it would take a feature-length
film just to explain what a hedge fund is. A sub-prime loan pusher working over
an innocent family with shaky credit has some nice visuals, but it’s too grubby
for Gekko to get himself involved in, even as an ex-con.

Secondly, Gekko was
the guardian of a certain privileged insider class of investors. Now only Joe
the Plummer and a handful of other people in the US aren’t involved in the
stock market in one way or another. The line between Wall Street and Main
Street has become so blurred that the nation essentially endorsed a massive
bailout of Wall Street so that we don’t end up selling apples in the streets.

Maybe we’re just too
depressed right now to sustain the antipathy we’ve always felt for our
culture’s most potent synecdoche for class warfare. Wall Street has always been
a slippery metaphor, both peripheral and central to our economic system. It’s
the place that defies the very orderliness, discipline, and self-abnegating
labor of the capitalism it presumably embodies and symbolizes. The original
Wall Street was fun to watch because Douglas’s Gekko remained fixed in a medium
shot–close enough to take pleasure at his greed, but far enough away so that we wouldn’t be infected by it. Now that we’re all members of the investor class, we see things differently. We’re more likely to see Gekko
juxtaposed with the tight close-ups of Douglas’s other character from 1987: the frantic, desperate Dan
Gallagher in Fatal Attraction.