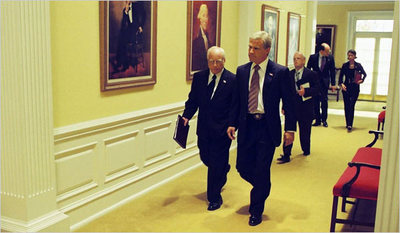 It’s probably a sign
of our uncertain and anxious moment in time that we could be confronted by a
movie that is at once topical and irrelevant. Such is the position of W.,
Oliver Stone’s latest foray into a genre he has pretty much to himself: the
expressionist biopic. From the moment this project was green-lighted both Stone
and his producers willfully ignored our waning interest in the current occupant
of the Oval Office. Why make a movie about a president we’d all wish to
forget–even Republicans?

The piety starts
with that most sacred of sports, baseball, with Bush standing on a baseball
field in an otherwise empty stadium. When the off-screen announcer introduces
him — “the 43rd president of the United States!” — he looks around for the
crowd that isn’t there. Already, though, Stone’s film has fallen off the rails.
The image is a clear reference to Bush’s vainglorious spirit, but it’s a
standard cinematic image. Besides, it can’t compare to the image we already
have: Bush’s notorious "Mission Accomplished" stunt in 2003. The
unimaginative irony of the opening scene is followed by more predictable biopic
vignettes: the lesser Bus as partying student, imperfect son, feckless oilman,
serial flirt, attentive husband, sports guy, born-again Christian, newly born
politician — before becoming the merry slayer of Saddam Hussein and pious
enabler of Wall Street’s pyramid schemes.

W. isn’t as visually
baroque as JFK (his j’accuse film) and Nixon (his sober, winter film), dark
and pessimistic, reflections of his own (and much of his generation’s)
disillusionment with American politics and power. But with W. Stone seems
flummoxed by the contradiction between Bush’s own sunny view of his own
political fate and the popular image of him as the most reviled president in
American history. We’re supposed to make the connection between the image of
the young Bush sloppily downing drinks to the chief executive with a visceral
hatred of Social Security and Medicare. What’s missing is a grasp of Bush’s
distinctive way of making mistakes. One of his first breaks from Cheney was his
nomination of Harriet Miers for the Supreme Court. The choice was impulsive and
intellectually lazy–incidentally, exactly the same kind of choice John McCain made when he
chose Sarah Palin.

Arguably, Stone
isn’t altogether wrong in his guess that we’re ready to sympathize with Bush,
at least a little. The problem is that Bush still doesn’t show any evidence
that he has an inner life. Stone never asks the questions I, for one, would like
to ask George Bush as his moment in history draws to a close: Where is the disappointment? Where is the rage?