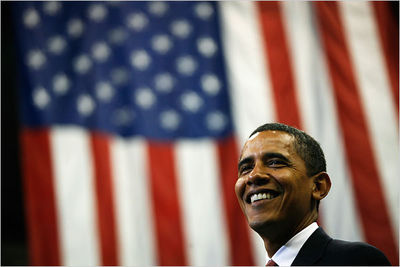 6:00 AM: Since nothing else is going on in the world except the presidential election, I will blog on that with a view from Chicago, Barack Obama's home town. There will be no drama to the local results: there are only 30 McCain supporters in Illinois, most of whom live in my sister's neighborhood in Mundelein, which, for some inexplicable reason, is a hotbed of McCain support. There isn't even a Wal-Mart or an oil derrick nearby. I don't understand it.To do list item: urge sister to move to another, bluer, suburb.

On the CTA train ride home last night a woman stood in the aisle and gabbed the entire ride on her cell phone about how she'd spent the weekend in Indiana canvasing for Obama. I was trying to read Nick Harkaway's Gone Away World, so her yammering was irritating, and the fact that she was working for a good cause while I spent the weekend selfishly raking leaves made her all the more irritating.

6:15 AM: Yesterday the Tribune ran a gushing headline, City Skyline on Display. This was a reference to the big Obama rally in Grant Park tonight. Embarrassing. How Podunk. Every viewer of Fox's NFL coverage gets a shot of the Chicago skyline about 30 times an afternoon, along with that disturbing robot thing dancing like he's at some prom at Evil Automaton High School. Besides, the Tribune endorses its first Democrat for president in almost 150 years and it gets all giddy because he's a townie: yet another reason not to take anything the paper says seriously. The stink of the George W. Bush endorsements (twice!) will take decades to wear off.

By the time I realized you needed a ticket for the Grant Park rally, the tickets were already gone. Feeling left out already, in a momentary fit of pique, I consider writing in Will Smith for president.

9:12 AM: Busy morning so far: voted, rode to work, dealt with the first in a series of problems I will be confronted with today. There was no line for voting, although I opted for the hand-written ballot rather than waiting for a touch screen machine to become available. I voted for Barack Obama, Dick Durbin, and then a whole slew of Irish politicians. I voted straight Democrat except for Cook County Clerk. I voted Green Party for that office because the polling station was accessible only to BMWs and minivans. It was virtually inaccessible by bicycle and blocks away from public transportation. You can't even walk there. At one point I found myself biking alongside a ditch on a feeder ramp to the Edens Expressway.

I also saw my first voting snafu. My neighbor arrived just as I was finishing up. She was informed that she'd registered as an absentee voter and therefore couldn't vote in person. My neighbor is a bit absentee herself, so she just stared blankly at the polling station worker.

12:04 PM: My co-workers are reporting long waits to vote, especially in the city. Several people have reported using the ballot in which you indicate your choice by drawing a line between two boxes. That's the method I used this morning, but I assumed it was some out-of-date method my home town hadn't bothered to change. I have expected to walk out of the polling station with a purple thumb, It seems like this method is even more vulnerable to error than the other ones I've used. But it looks like that's the method Barack and Michelle used. (They were 200th in line to vote!)

Now that I've voted, my next major decision is to choose something to eat for dinner while we watch the returns. The New York Times suggests a popcorn and dinner motif for tonight's viewing. The metaphor breaks down, but the idea is a good one. My wife has already suggested having elephant for dinner.

And speaking of the Times, David Brooks, whose columns have been rather gaseous lately, has a good piece describing the generational change at work in this election. Interestingly, he seems to assume Obama is going to win.

1:43 PM: This morning Barack Obama swung by Indianapolis, which nobody does just for the hell of it. The Swamp quotes Obama explaining, "I think we can win Indiana, otherwise I wouldn't be in Indiana." Indiana is one of those early bellwether states, along Virginia. If Obama wins in Indiana, then the outlook for the rest of the evening is very good.

3:36 PM: If there's a single source that will give an early indication that Obama will win, it's the Virginia State Board of Elections site. It starts reporting at around 6 PM Central. The math says if McCain can't win Virginia, he can't win the presidency.

Meanwhile, still no decision on what we're going to have for dinner, but we're leaning toward carryout from someplace so we can be in front of the TV by 6 to watch the results.

6:30 PM: I boarded a train full of Northwestern University undergrads on their way to the Obama rally in Grant Park. One guy yelled at his girlfriend for voting against the referendum for a new state constitutional convention. "You voted against that thing? What's the matter with you!" They were serious.

When I arrive home my four-year-old son asks to see my voting sticker, which I show him. He then asks, "Are you watching Barack Obama?" When I tell him yes, he replies, "I don't like that movie." Through a complex series of negotiations, deceptions, and parental distraction, he's managed to have Milk Duds for dinner, and now he's  completely wired.

Local TV is reporting that people are running through Grant Park to get close to the stage. The entire South Loop is basically shut down. It's a lovely evening to be in the park. I wish I there. Instead we have Fox News on for a moment. They're acting like a responsible news outlet, but we're not going to watch long enough to see how long they can keep it up. We switched to CNN, which is reviewing the SNL skits.  Evidently they're easing into their election coverage.

Latest on the dinner front: sandwiches and a Spanish granacha I picked up from The Bottle Shop, where I often stop on my way home.

7:12 PM: The polls are still open in Illinois because of a judge's orders, but WGN has already called the state for Obama. A reporter says local politicians are already jockeying for jobs in the Obama administration. Rahm Emmanuel wants to be chief of staff, just to name one. Another reporter says Obama played basketball somewhere on the West Side this afternoon.

8:43 PM: Slate is the first media outlet I've seen that's stated the obvious after Ohio was called for Obama: they are projecting the election for Obama. ABC News is interviewing some guy with a Republican haircut–oh, he's the governor of Minnesota–who is already diagnosing the reasons why McCain has lost the election, even though ABC isn't projecting an Obama victory.

Grant Park is crammed, and more are arriving.

ABC News has the only interesting exit poll numbers I've seen all night: 53% of people with incomes over $200,000 voted for Obama, even after he promised to raise their taxes. This underlines how the Republican Party has become the party of undereducated rural whites, and very few others.

In contrast to Tom Pawlenty's despairing comments, John Lewis admits he's been crying, saying "This is a new day in America."

10:18 PM: John McCain is conceding. He won the support of the same people who voted for George Bush in 2004, but the country has changed, and McCain and the Republican Party haven't changed with it.

11:49 PM: No other American politician could have brought about this kind of reaction.