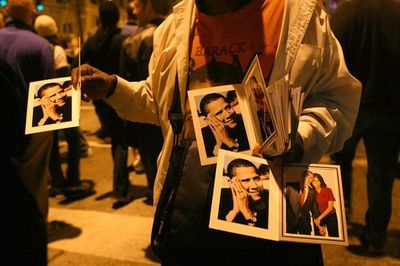 It’s been an extraordinary week here in Chicago, unlike any I’ve ever seen. It’s been interesting to watch it unfold in the media and in person. This afternoon a developer, usually a taciturn guy (“just tell me which window to wash and I’ll wash it” is his motto), told me, “This has been the most amazing week.” Trust me, this was practically an Emersonian outburst from him. Another co-worker talked non-stop on the elevator ride up about how she attended the Grant Park rally on Tuesday night. I couldn’t help but notice–it was an elevator, so there’s not much else to look at–that she’s doing her part to bring about change by doing away with her bra. There’s something almost erotic in the air, vague and charged and not entirely cathected on the object choice.

One of the most striking things about this week is the absent presence of Barack Obama himself. He’s here, but except for a couple of tightly controlled pressed conferences, he’s been invisible. During the campaign there were casual rumors of his activities in the city–he was attending a fund raiser on the North Side, he was working out at the East Bank Club–but now he’s an almost spiritual presence. Even the grubby jockeying for political positions, usually an elbows-out affair here, has a mirthful tone.

Chicago is an interesting place to be right now. I’ll be sorry when Barack leaves and starts to govern.