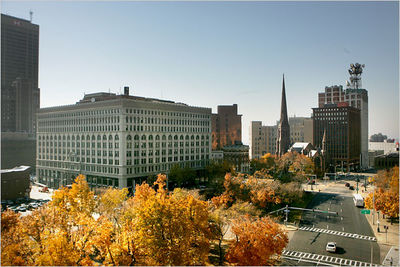 I’ve lived my entire life in the Midwest and in Pennsylvania, so I’ve developed a keen appreciation for depressed post-industrial cities. So I was heartened to read Nicolai Ouroussoff's account of Buffalo’s gallant efforts to preserve its architectural history. Founded in 1825, the city combined French Enlightenment aspirations with nascent American industrial power. During the late nineteenth and early twentieth centuries, the city was virtually remade by vigorous Progressive Era Modernism. Then it all unraveled in the space of a decade.

It’s hard not to root for Buffalo. Not only would forging an urban identity out of early Modernism would be a nice antidote to the “George Washington slept here” nostalgia of other East Coast towns and cities, it would also remind us of what truly civic-oriented architecture looks like.

Ouroussoff reports that Buffalo hopes to earn some tourist dollars from its preservation efforts. There’s nothing particularly wrong with this plan, but Buffalo has some factors working against it. An impressive array of American architects worked in the city—Henry Hobson Richardson, Frederick Law Olmsted, Louis Sullivan and Frank Lloyd Wright—but Buffalo doesn’t have a major architect closely associated with it the same way Chicago has Sullivan and Wright and Philadelphia has Frank Furness. If the city has a signature architectural form, it’s the grain elevator—economically important but not as symbolically rich as New York City’s skyscrapers.

The city’s potential for tourism takes off and comes to a screeching halt in this one sentence: “By the end of the 19th century the city’s grain silos and steel mills had become architectural pilgrimage sites for European Modernists like Erich Mendelsohn and Bruno Taut, who saw them as the great cathedrals of Modernity.” In other words, Buffalo’s history is a history of a way of seeing, and a narrowly aesthetic one at that. Translated into the language of tourist guides it can’t help but sound pedantic, with none of the dilapidated romanticism of New Orleans or the Yankee vigor of Boston.

On the other hand, Buffalo was the first major American city founded during the era of industrialized global trade. The city could still create an historical narrative around itself as a global city, illustrating both its benefits and its perils. Built on the canal barge economy, Buffalo is a lesson in the transient order and economic fragility of a globalized economy.