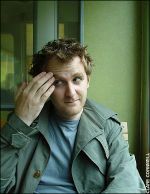 There are advantages and disadvantages to going into the family business, as anyone who has done so knows. One can be overshadowed by one’s more illustrious forbearers, but at the same time one can avoid the older generation's mistakes. Such is the case for Nick Harkaway, author of the novel The Gone-Away World

and son of John le Carré, the eminent spy novelist.

The fall of the Berlin Wall in 1989 spelled the end of the Cold War spy fiction genre and the entire gray, muffled world spy novels portrayed. Harkaway avoids this problem by making up his own world, in this case an alternative late twentieth century. The origins of this world are vague, but one plausible explanation is that Harkaway’s dystopia is what our world would look like if the entire Communist revolution never happened. Perhaps to soften the Oedipal impact of Harkaway’s historiography, there’s a “Hi, Dad!” moment in the novel, when our unnamed hero and narrator tells us how the UK merged with Cuba.

Make no mistake: The Gone-Away World is not his father’s genre fiction. The plot is lively and complex, for the first half, anyway. Our hero is a nameless orphan who works on a security detail guarding The Pipe through which flows some sort of gunk that repels Stuff, thus carving out a sliver of livable land in an otherwise desolated planet. Stuff is very bad stuff indeed. It’s the byproduct of the Gone Away weapon, which, instead of blowing things up like nuclear weapons, makes them disappear as if they never existed, like jobs or stock market assets. Indeed, Gone-Away can be read as a clever, if exhausting, anti-corporate parable. Key to this interpretation is the New People, high functioning zombies who have been maimed by contact with the Stuff. The New People have needs but no souls, like the faceless masses who make and buy all the junk circulating throughout the global economy.

A philosophy major at Cambridge, Harkaway has read Frege—I’ll bet he’s the first Frege enthusiast in British literature; he even takes care that we pronounce his name correctly—so he’s a smart guy. But his material is hopelessly juvenile. There’s a powerful strain of boy fiction here. The women have a Japanese anime flimsiness about them. There’s a major character named Gonzo, and he actually is gonzo. And there are ninjas—lots of them, which is always a bad sign. Midway through the novel Harkaway’s eighteenth-century digressive narrative style abruptly devolves into a linear vengeance story with a distinctly high school shape to it.

Harkaway’s hero goes through every expression of rage short of angrily slamming his locker door shut. Like all wronged introverts, the hero’s most potent expression of rage is irony that starts off like wit but always veers away from its target at the last moment. He describes a dazzlingly attractive young woman as “the daughter of Satan and the Wife of Bath” while longing, hopelessly, for her “featherweight kisses” delivered “with an instinctive political acumen.” The young woman is the perfect embodiment of the Eros of politics, but the narrator takes a masochistic pleasure in her scorn for him.

The novel’s feverish irony infects the book cover as well. The dust jacket is a tacky pink and green, and the language strains to maintain its neon glow. Harkaway can toss off brilliant metaphors; he just doesn’t always know when to stop. I loved the Satan/Wife of Bath line, but a few sentences later he describes the same woman, needlessly, as “somewhere between a tabloid editor and a Beverly Hills madam.” The plot is meant to sweep us along, and it’s serviceable in that regard. If you can get past the febrile patches, the main attraction of The Gone-Away World is Harkaway’s ceaselessly inventive discourse. In other words, come for the plot, stay for the language.