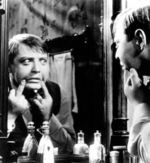 I’m not one to get too worked up about best of lists, but when Cahiers du cinéma updates its 100 best films of all time list, it’s worth paying attention. Cahiers is probably the most historically important film journal still in existence, and its been shaping taste since its founding in 1951 by André Bazin and other members of the postwar Paris film club movement.

Tops on the list is Citizen Kane, an important film to the French for a number of reasons. Bazin first gained public notice when he defended the film after it was attacked by Jean-Paul Sartre. (Sartre published Bazin’s response in Les temps modernes in 1947.) Second on the list is that great oddball of an American film, Charles Laughton’s Night of the Hunter. Third is my personal pick for greatest film of all time, Jean Renoir’s Rules of the Game. Other personal favorites, Jean Vigo’s Zero for Conduct and Fritz Lang’s M, are fifth and sixth, respectively. French critical idiosyncrasy starts to appear in the seventh spot, the worthy but not that great Singin’ in the Rain. French critical idiosyncrasy continues all the way to the end: there isn’t a single British film on the list.