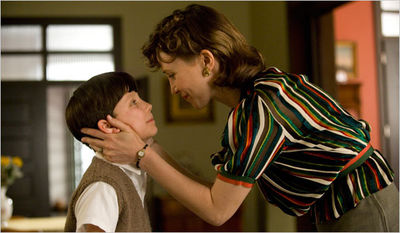 Just in time for Thanksgiving, A. O. Scott takes a clear-headed look at the bumper crop of Holocaust films coming our way. He asks, “Why are there so many? Why now? And more queasily, could there be too many?” The answers vary according to place. For Europe the Holocaust remains an unresolved historical event, especially in France. Generally speaking, Europeans have produced serious, or at least well-meaning, films about the Holocaust, although Roberto Benigni’s Life Is Beautiful was neither.

Hollywood, though, is a different story. As Scott points out, “Hollywood trades in optimism, redemption and healing, and its rendering of even the most appalling realities inevitably converts their dire facts into its own shiny currency.” For American films the Holocaust means affirmation of life and Oscar nominations, which, in Hollywood, are virtually synonymous.

Scott suggests that Oscar nominations are why Hollywood is loading up its fall release schedule with Holocaust films, including The Boy in the Striped Pajamas (still above), Adam Resurrected, The Reader, and, of course, Valkyrie. Hitting multiplexes across the country during this miserablist autumn, this year’s crop of Holocaust films probably won’t suffer the fate of last year’s Iraq films, for the Holocaust film has become a well-honed genre with its own stable and reassuring conventions.

I would suggest another reason for the sudden reappearance of the Holocaust film: all the bright colors and off-kilter forms of the mid-century modern aesthetic, which has been so popular throughout the recent housing boom, has now given way to exactly what the mid-century modern was supposed to obscure: the catastrophes of the Depression and the Second World War. By alternating back and forth between the two, we relive the traumas of the last century over and over again.