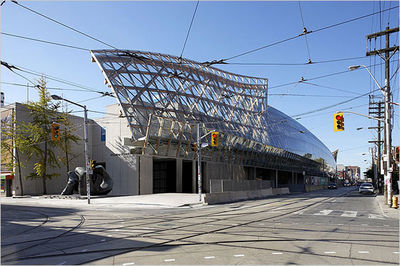 Last week Frank Gehry’s redesigned Art Gallery of Ontario opened to the public. The best access I have to the building is Scott Norsworthy’s remarkable Flickr series, taken while the building was in the late stages of construction last August. So, in keeping with the unfinished nature of Norsworthy’s photos, here are some impressionistic, incomplete observations:

Narrative: Gehry once characterized himself as a “hands-on” architect, as opposed to a narrative architect like Robert Venturi. Yet the AGO is embedded in filial narratives. Gehry grew up not far from the museum, and his grandmother lived around the corner, where she “kept live carp handy in the bathtub for making her gefilte fish,” in Nicolai Ouroussoff’s lyrical words. Gehry spoke movingly of his relationship with AGO donor Ken Thomson, who died before the building could be complete. The building, several commentators have stressed, is a homecoming for Gehry.

Cheapskate: Gehry’s self-described “cheapskate” architecture is on full display here, especially in the blocky rear portions of the museum. This approach rejects the fusion of material and form in more traditional civic architecture. It also alludes to the budgetary limitations of this project or any cultural institution. More broadly, it alludes to the gap between the economic organization of society (apparently solid yet prone to sudden upheavals) and the aesthetic production of art (inessential yet uplifting).

Ground: The whole issue of groundedness and space is a complex one. What place does the old phenomenological body have in public spaces like a vast new art museum with its double imperative to show off art and raise money? The individual art lover, the embodied gaze, is the least important element in any contemporary art museum. In any case, known for his angles that go off into nowhere, here Gehry’s long, low building seems uncharacteristically grounded in a specific place, both literally and figuratively. Or maybe, in the case of Gehry, it’s more appropriate to speak of the will to groundedness.

Wrapping: Gehry’s design wraps around the older core of the museum and penetrates it at strategic locations. Like virtually all of Gehry’s designs, the AGO is a brilliant wrapper. But the sleek façade of the AGO is itself wrapped in various discourses, including the nostalgic (see “Narrative” above) and the nationalistic: “Frank Gehry says revamped Art Gallery of Ontario will make Canada proud” announces a headline from the Canadian Press. The AGO is also wrapped in Gehry’s own style, a commercial brand in its own right.