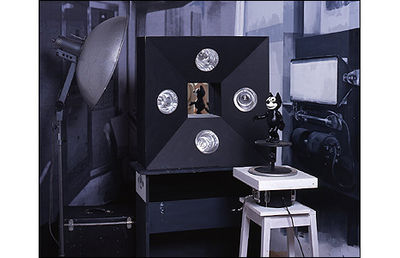 As we approach the film awards season in the US, it’s worth noting that we don’t have anything like Britain’s Turner Prize, awarded each year for the best exhibition by a British artist. The prize carries with it a £25,000 check and the ceremony is broadcast on television before a national audience of outraged and baffled viewers. Last night the award was presented by Nick Cave to Mark Leckey, a part-time professor of film studies at Frankfurt's Städelschule and the only male artist nominated, during a ceremony at Tate Britain broadcast live on Channel 4. Leckey beat out critics’ darlings Goshka Macuga, with her enigmatic modernism, and Runa Islam, who makes films with the poise and quietude of a tea ceremony.

Leckey is a noisy bricoleur, assembling artworks from American and British popular culture. About all you need to know about Leckey’s work in that James Cameron's Titanic is something of a touchstone text. It’s featured, along with Felix the Cat, in the centerpiece of Leckey’s Turner prize exhibition, Cinema-in-the-Round, pictured above. Leckey also discussed the film in his lecture/performance, which was either part of his exhibit or a supplement to it (or maybe they amount to the same thing). Or maybe people thought it was part of the Turner Prize exhibition because Leckey wore a loud shirt and spoke in a showy Scouse accent.

Anyway, in case there was any doubt about Leckey’s ultimate shallowness, he also entered Made in 'Eaven, a film about a sculpture, in this case Lackey’s rendition Jeff Koons' stainless steel Rabbit. Not only is Made in 'Eaven about an inert object, but it’s about an embarrassing artwork. I guess we should be relieved that we’re not reminded yet again about the mordancy of global capitalism, a standard trope in these types of artworks, but by recasting Rabbit as an act of voyeurism, Leckey creates a bit of gimmicky narcissism that’s as tiresome as Koons’ work has been for years. Deeply subjective pop culture anthropology still has a place in the contemporary art world, I suppose, if only because it's being practiced everywhere on the Internet. It's just that there are a lot more interesting texts out there than Titanic and Felix the Cat.

Complaints are to the Turner Prize as designer gowns are to the Oscars, and there were plenty of complaints again this year. But compared to previous years, like 2001, when somebody won for a light bulb that switched on and off, this year’s complaints were dispirited and half-hearted. The most frequently voiced criticism was that this year’s exhibition was boring and academic. This may have been why Leckey was awarded the prize. He looks like an artist’s rendition of a television celebrity. Which, as his comments after the award ceremony revealed, is what he really wants to be.