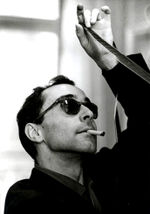 It’s hard to imagine anyone who has lived his or her life so completely subsumed by the cinema as Jean-Luc Godard. After reading Richard Brody’s excellent Everything Is Cinema: The Working Life of Jean-Luc Godard

, we discover that Godard was unfit for respectable work. He was simply too weird to be anything else but a filmmaker.

Godard began his career in the cinema by writing articles praising American movies and stealing books to fund other people’s films. When he finally got the chance to direct his first feature-length film, he nearly botched it. In Brody’s account it’s a wonder Breathless was ever completed. Part of the popular legend about the film was that its innovative style was the result of Godard’s inexperience, but he was almost criminally inept. Although the script had been in development for years, Godard trashed it, feverishly re-writing the script each morning before shooting. The cast and crew were baffled by his methods. Jean Seberg wanted to quit. Jean-Paul Belmondo had similar misgivings before deciding that Godard would never pull it together enough to produce a theatrically-viable film, so no one would ever see it.  Godard’s producer, Georges de Beauregard, was less passive: he punched out Godard when he found his director lounging in a café when he was supposed to be shooting.

Breathless went on to become a huge critical and popular hit, in no small part because of Beauregard’s skilled publicity management surrounding the film.  Declared a genius after 90 minutes of film time, Godard’s was free to indulge in his twin obsessions: the nature of the cinema and vulnerable young women who didn’t speak French very well. For instance, Godard conceived Band of Outsiders as an American-style “simple, perfectly legible film.” The film starred his most enduring object of obsessive desire, the Danish-born Anna Karina, fresh from a miscarriage and a suicide attempt. Greeted with mixed reviews and anemic box office when it was released in 1964, Band of Outsiders is among Godard’s most straightforward and accessible films. No one would claim it’s a great film, but it does have its charms. Brody, a film critic for The New Yorker, is reticent about the film’s qualities. This reticence carries throughout the book, as Brody boxes himself into the role of biographer. One of the best set pieces in Band is the odd and appealing dance Karina and her male co-stars perform in a café. Brody informs us that the dance was called the Madison, but other than describing it as “snazzily foot-stomping,” he barely remarks on it. Which is too bad: Brody is a terrific critic and a fine writer. It would have been nice to hear some of Brody’s critical voice.

Everything Is Cinema began as a profile in The New Yorker, and the book retains the flat reportorial style of the magazine’s articles. The book is crammed full of information, not all of which is fully integrated. Brody suggestions a connection between Godard’s film Helas pour moi and the centennial of Walter Benjamin’s birth in 1992, but the causality is tenuous. There are plenty of gossipy details, too, like Godard’s pathetic pursuit of Bérangère Allaux, an actress 45 years younger than him. (It was Allaux who acidly remarks that Godard “likes vulnerable young girls.”) We even get a glimpse of his laziness. Commissioned to create a short film on the sin of sloth, Godard originally planned to shoot a man sitting on a beach for ten minutes. Arranging a single ten-minute shot turned out to be a lot of work, so Godard shot a conventionally edited film about an actor who refuses to do anything. In this side project and his major films, each of which is granted its own chpater, Godard comes alive in Brody’s narrative—all the director’s weird, at times creepy, brilliance.

As Brody admits, Godard is no longer at the center of the cinematic world, and his filmmaking practice long ago left most of his audience behind. So why read a 629-page account of the director’s still incomplete working life? Because Jean-Luc Godard is still Jean-Luc Godard, now more than ever.