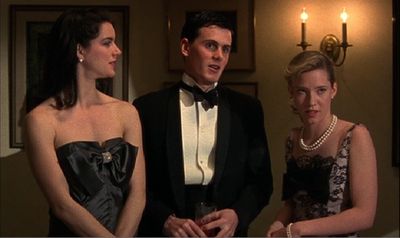 Over the past few months the New York Times has run a series of reconsiderations of past films that comment on our current troubles. Most recently, for instance, A.O. Scott looks at the dark side of It’s a Wonderful Life, just in time for this gloomy holiday season. The other day my wife and I watched Metropolitan, Whit Stillman’s 1990 film about young socialites in New York debutante society at the twilight of the Reagan years. Interest in the film was briefly revived in 2006 by conservatives enamored by Stillman’s tone of wistful longing for a vanished era. However, the film’s contradictory depiction of what one character calls the “urban haute bourgeoisie”—both eternal and doomed to imminent extinction—eluded simple polemics, so cultural conservatives dropped the New York preppies and moved on to penguins. However, the film’s elegiac tone and white-tie despair are newly relevant in this time when Best Buy’s doors dolefully urge us to have “A Happier Holiday.” The characters in Metropolitan thrive in a sociability bubble that soon bursts, leaving them walking penniless on a Long Island roadside.

The film begins with a scene that can only happen in Manhattan: A crowd of preppies in evening wear tumble out of a cab and land at the feet of young Tom Townsend, an Upper West Side Fourierist shivering in a London Fog raincoat on a cold night during Christmas break. The preppies, who call themselves the Sally Fowler Rat Pack (SFRP), immediately adopt Tom as one of their own. He just as promptly denounces them and their entire value system. Tom’s class animus runs smack into Sally, an earnest Janite in a pink dress and pearls. She chides him in a primly Jane Austen way: “I can’t stand snobbery or snobbish behavior of any kind.” Nick, the clique’s historian and expert on the minutiae of urban haute bourgeois life, informs Tom: “Deb parties are a way of getting invited to all of the best places and being supplied with food, drink and companionship at very little cost to yourself. What could possibly be the matter with that?”

Nick and Tom soon form an uneasy alliance against absent fathers, an aristocratic cad who threatens the virtue of the group’s young women, and the slow slide into barbarism that threatens the preppie class. Tom has an entirely intuitive understanding of the political economy, but, like the film itself, he’s hazy on the details. Walter Benjamin described Fourier’s theory of phalansterie as “the ur-wish symbol of leisure and plenty,” which pretty much sums up the deepest desires of the UHB.  If Tom is too abstract—even his expressions seem abstract and vague, as if the SFRP were a pop quiz in Sociology 101—Nick is firmly grounded in details. He knows where to buy tuxedos at a discount, how to wear a detachable collar, and all about the venalities of the class immediately above his. However, Nick’s stores of cultural capital aren’t bottomless. He apes the styles of the aristocracy by sporting a top hat and a cane, but he gets punched out by a baron anyway.

The film plays out its conflict between cultural capital and late adolescent desire with a pleasingly digressive ease. Here dialogue is plot. The characters chatter about the literary virtues of Mansfield Park and the sociological accuracy of the terms used to describe them. They confess romantic yearnings, but demur from directly informing the objects of their desire. They play strip poker. All of the action takes place in dimly-lit Park Avenue apartments and night-for-night exterior shots of venerable—and vulnerable—New York social centers.

In the commentary track Stillman notes that he tried to shoot in places that were doomed: the Plaza Hotel, the 21 Club, Park Avenue without street vendors. The noirish cinematography mirrors the characters’ awareness of the fragility of their world. Nick sighs, “With everything that’s going on this is probably the last deb season as we know it.” Another morose preppie explains vaguely what’s about to end: “The stock market, the economy, contemporary social attitudes.”

In a way, they’re wrong about the end of something: the exclusionary effects of their cultural capital came to be intensified by the massive shift upwards of economic capital in the post-Reagan years. But in another way the Sally Fowler Rat Pack are right: we can no longer mourn the loss of idealized values when we have the impending loss of very real things looming ahead of us.