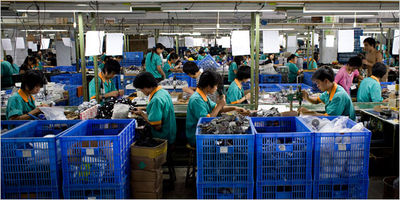 Exactly 30 years ago last month, Deng Xiaoping addressed the Third Plenary session of the Communist Party and declared the start of gaige kaifang, market-oriented reforms and more trade with the outside world. These policies would later come to be called “socialism with Chinese characteristics.”  China has since become an economic juggernaut, producing oceans of cheap goods and unsettling Olympic spectacles. China’s inefficient export-oriented economic model has run into trouble during the global economic downturn, but that hasn’t prevented China’s leaders from standing on their pile of US Treasury bonds and lecturing the US on our sloppy risk management.

But as far as their own risk management is concerned, the Chinese themselves have been more lucky than good. Thirty years down the road it looks as if the Chinese shed their Mao suits and opened textile factories under the benevolent guidance of the central government. In fact, Deng’s economic reforms have succeeded only by virtue of a great deal of subterfuge. Deng strictly prohibited private industry, but entrepreneurs proceeded by operating their businesses as “red hat” collectives and enterprises–private companies operating under the flag of state ownership. Deng’s reforms succeeded because the Chinese people disobeyed Deng’s rules.

, translated into English by Flora Drew and published in the US last spring. The central tension in this strife-filled book is between the docile generation of Mao’s revolution and the Tiananmen Square generation. The tension is dramatized in a small Beijing apartment. Ma Jian’s protagonist and narrator, Dai Wei, lies in a waking coma, conscious but paralyzed, since he was shot fleeing Tiananmen Square on June 4, 1989. For the past 10 years he has been tended to by his aging mother. She complains incessantly, asking him to hurry up and die. When he lingers too long, she sells one of his kidneys.

That Dai’s mother should prey upon his body is emblematic of the mythic violence to which her generation was subjected. During Mao’s land-redistribution movement of the 1950s, Dai’s landowner grandfather—just “two fields and three cows”—was sentenced to be buried alive by one of his sons, who would have been executed had he refused. Dai’s early girlfriend’s mother had her pubic hair shaved and, humiliated, committed suicide; another friend’s father was tortured and wound up in an asylum. Dai own father, a violinist who toured America, was branded a rightist and worked for 20 years in a forced labor camp where he had to resort to cannibalism.

The younger generation feeds more metaphorically on its own discontent. “’You’re all starving to death,’” one of Dai’s friends says during the buildup to the Tiananmen Square protests. “‘Where do you find the energy to engage in these power struggles?’” Dai and his college revolutionaries, like their American counterparts during the 1960s, have a lot of moxie, but they’re also petty, disorganized and indecisive. Some want to overthrow the government; others just want to have sex without state interference. They abscond with the funds donated their cause when the tanks start to roll. Meanwhile, thousands go on a hunger strike.

During the Tiananmen Square protests of June 4, 1989, Dai Wei takes a bullet to the head and spends 10 years listening to his mother complain. Most of Dai Wei’s friends who survive the aftermath of Tiananmen Square slink off and get rich. One of Dai’s former girlfriends, for instance, becomes a real estate magnet buys his mother’s building, intending to raze it as part of Beijing’s redevelopment in preparation for the Olympics. Other friends move to America, join the Communist Party, operate a tour company, and become an interior designer. Dai’s compatriots achieved social consciousness as squabbling rebels trying to seize their historical moment, only to end up “advanced wealth makers” for the new China.

Four hundred million Chinese were raised from poverty as Dai sleeps in an iron bed. In the China of 2009 social unrest is increasing again as the export economy sputters and the environment deteriorates. The question raised by Ma Jian’s novel, however, is whether or not China has truly awakened from its coma. Dai himself seems to suggest that China will continue to simply grind down its problems through inertia. “The Chinese are very adept at ‘reducing big problems to small problems, then reducing small problems to nothing at all,’ as the saying goes,” he tells us. “It’s a survival skill they’ve developed over millennia.”