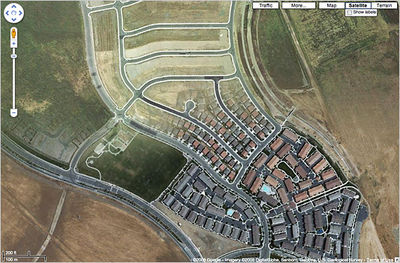 The half-finished exurban housing development is an anthropological
symbol of an exhausted society. High gas prices, years of frantic consumption, raised
environmental consciousnesses, and, most importantly, a collapsed real
estate market have left their mark on the American landscape, as this
image from Allison
Arieff’s NYT op-ed piece indicates. The image is of a viral economy that has lost its life force.

So what are we to do with all these
prematurely decrepit outer suburbs? Arieff dreams of an urban-style redevelopment project on a national scale. But Arieff knows the empty mock Tudor at 17 Leafblower Lane isn’t going to be converted into a chic French/Vietnamese fusion restaurant any time soon. Suburban housing developments are supposed to be eternally new and instantly complete. If they’re not, they are simply abandoned. Urban areas have long experience in
backfilling its own environment, developing vacant lots and knocking
down poorly utilized spaces, like those devoted to nail salons and car
repair shops. San Francisco, always leading the green trend, has shown
us how to turn brownfields into kid-friendly eco parks. New York, with
a different ethos, has repurposed an elevated train track into “a
vibrant public park.” Just let New Yorkers roam free and they can transform any piece of nature into an ideal urban space.

Urban spaces are easily redeveloped because they’re compartmentalized on a human scale. They’re also historically
layered; reuse is built into the environment. Urban spaces tend to be
constructed to accommodate a variety of human activities–everything from flaneurie to anti-war protests. Suburbs, the
faraway exurbs in particular, are more focused around one human
activity: consumption.  The paradigmatic exurban spaces, the big box
department store and the McMansion, are big because they need to house
big consumer objects: overstuffed leather furniture, flat panel
monitors, SUVs. Constructed to take advantage of open spaces (read:
plenty of parking), big box stores and large tract housing are
paradoxically inward-looking structures. For all their high-quality
components, they are transient structures. Big box stores can’t be used
for anything else except low-margin retailing; otherwise, they have to be torn down. For one thing, they lack
the long stretches of windows that make nineteenth-century warehouses
such appealing residential spaces. McMansions are essentially bloated
versions of earlier, post-war suburban homes, so they can’t be
subdivided as easily as more compartmentalized Victorian houses often
are.

Tellingly, Arieff has no suburban gentrification stories to tell except for some kids skateboarding in empty pools. Instead of large redevelopment projects, Arieff says, “it seems a prudent time to swap Viking ranges for double-paned windows and high-efficiency furnaces.” All that wasted (and wasteful) space will be redeemed one weekend project at a time. This is a sensible and down-to-earth proposal, but also a despairing one. I’ve already installed double-paned windows and a high-efficiency furnace. Now what? Do I sit back and wait for the ozone layer to heal?

Green technologies are fine–in fact, even the hype is useful, I think–but what we also need is more inventive and sustained urban/suburban planning. We’re stuck in the same fifty-year-old urban/suburban binaries, not to mention the same personal solutions to collective problems. In order to fix our environment we need something else besides different consumer choices. We also can’t sit back and wait for technology to solve our collective problems. Plenty of people are working to improve our microchips. Who is imagining our next urban space?