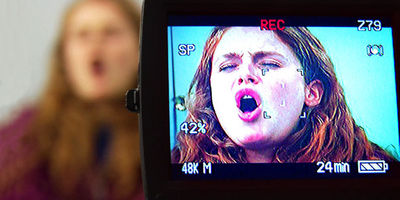 Here is the first installment of my reviews from the 2009 Sundance Short Film Program.

The short film form, like the short fiction form, requires discipline and control. Character and scene must be established quickly. Dramatic climax arrives quickly, sometimes before we’re ready for it. The denouement is tidy if open-ended—formal closure with thematic openness.

Two films from the Sundance Short Film Program satisfy the demands of the form by using control as a dramatic theme. Madeleine Olnek’s Countertransference features a manipulative psychoanalyst and her hapless analysand. The psychoanalyst resorts to bizarre means to keep her sad-sack patient dependent on her, including stripping naked and nearly throwing her out a window. Deb Margolin plays the patient with a deadpan misery, but with amusement just under the surface. The therapist’s machinations are a wonder to behold, but Olnek stretches credulity once—no, twice—too far to create her tiny world of controlling women.

Justin Nowell’s Acting for the Camera is less contrived but no less controlled. Two drama students re-enact the famous fake organism scene from Harry Met Sally. The teacher goes to extreme lengths to elicit a believable performance from ingénue actress playing Sally. He could have actually seduced her with less effort. He barks out method acting clichés to his increasingly flustered students and prances about, reveling in his own power. You get the sense that the real performance he’s trying to elicit is his own. The idea that a great performance originates in the interior depths of the actor keeps drama teachers employed, but the Meg Ryan’s fake organism scene was effective because of the context in which her performance took place. Joseph Urla plays the drama teacher with a thin-voiced intensity of a terrorist cell organizer. Mallory June plays the actress doomed to spend her career in Disney Channel productions.

If science is a form of control, then Ruth Jarman and Joe Gerhardt’s Magnetic Movie is about a benign control tempered by wonder. Magnetic fields are the stars of this very short documentary (about five minutes long): they stretch and preen like felines in drab laboratories as voice-over commentators tell all about the arcane mysteries of magnetic fields.