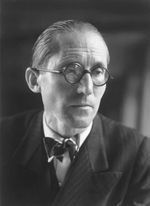 is the first full-length biography of the architect, which is surprising, considering how many people are still angry at him. Designer of the now derided Unité d’Habitation in Marseille and the sublime concrete hunk of a chapel in Ronchamp, Corbusier was a creative monster. For all the pristine clarity of his architecture, he lived a messy and contradictory life. His megalomania took an usually negating form. He loved to sweep things away—his clothing, one half of Paris. Creating something beautiful within the voids so tormented him, so nourished his masochism, that one wonders if we wouldn’t have preferred to stop at the act of destruction.

There were two things Corbusier couldn’t let go of: his alcoholic wife and his hectoring mother. His wife habitually invited men to admire her cul long after the ravages of drink and disease rendered it less than admirable. His mother lived 99 years, and most of that time seemed to have been spent in correspondence with her son. The letters between mother and son make up a large portion of Weber’s source material, and they make for tedious reading. Sometimes the letters illuminate the buildings Corbusier designed, such as the two houses he built for his parents (the first was too expensive, the second leaked). Most of the time, though, Corbusier complained about every slight he suffered.

Like another towering figure of modernism, James Joyce, Corbusier was an injustice collector. However, unlike Joyce, who is diminished in our eyes by the pettiness of the slights he suffered, Corbusier is diminished by the magnitude of the slights he collected through a long career of ingratiation and connivery.  Stalin resisted Corbusier’s entreaties to execute his design for the Palace of the Soviets. The Vichy Government similarly turned a cold shoulder to Corbusier’s authoritarian-ready architecture.

Even his respectable clients irritated him, and he them. Six months after its completion, the house he designed for Raoul La Roche still had leaky roofs and unresolved lighting schemes. When Corbusier finally got around to checking out the construction problems, instead of addressing La Roche’s punch list he ripped down all of the paintings by Amédée Ozenfant, Corbusier’s best friend at the time. Corbusier claimed that the walls of his houses should be free of clutter, but that didn’t stop him from painting on other people’s walls. On a visit to designer Eileen Gray’s new villa Corbusier decided that the walls lacked something, so he stripped naked, as was his practice, and proceeded to paint sexually-charged murals all over Gray’s new house. Gray reported to a friend that she felt “raped” by the incident. Corbusier went home quite pleased with himself.

In his volatile megalomania tempered by an unerring grasp of beautiful form, Le Corbusier has frequently been compared to Frank Lloyd Wright. The American architect is a lovable rascal compared to the truly insufferable Swiss architect. Furthermore, there’s a sense of completion to Wright’s built work. Corbusier’s work seems more fragmentary, and, as a result, more aporetic. This sense of paradox and incompletion, I think, is why Corbusier and his designs continue to fascinate us, even though we’re not sorry he’s gone.