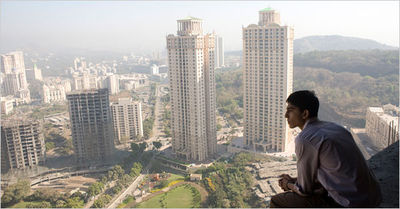 With its nomination for Best Picture, Danny Boyle’s Slumdog Millionaire has taken another step in completing its own feel good narrative as the little indie that could in an Oscars lineup consisting of some fine but rather staid studio products and The Reader, which Slate’s Dana Stevens has renamed Boohoo, I Bonked an Illiterate Nazi. The antagonists in Slumdog’s rags to riches story are critics harrumphing over Boyle’s jaunty look at Mumbai’s urban miseries. Writing in the London Times, Alice Miles denounces the film as “poverty porn.” She wonders, “As the film revels in the violence, degradation and horror, it invites you, the Westerner, to enjoy it, too. Will they find it such fun in Mumbai?” (The answer: kind of: the film has done respectable box office for a foreign film, but it isn’t a mass hit.) Bollywood star Amitabh Bachchan slammed the film in his blog, even though the film’s hero dives into a toilet to get his autograph. Several people have pointed out that the term “slumdog” isn’t really Mumbai slang; it was invented in the novel upon which the film is based. Slate’s Dennis Lim says the charges of anesthetizing poverty are misplaced; rather, “the movie’s real sin is not its surfeit of style but the fact that its style is in service of so very little.” Lim doesn’t buy the excuses for the flimsy narrative as citations of Bollywood style. “Some of Slumdog‘s melodramatic tropes are Bollywood (and Old Hollywood) staples, but the limp dance number that closes the film lacks both the technique and the energy of vintage Bollywood.” In other words, Slumdog Millionaire isn’t aesthetic enough.

Neither sufficiently realistic nor precisely fantastic, Slumdog, like its hero, is caught between two irreconcilable and unstable places: between the realities of urban India and the mass culture fantasies of the mainstream Indian cinema. Charges of ethnographic and historical inaccuracy have dogged every film ever set in a time and place other than the audience’s own. But I would argue that Boyle’s film is truer to the Bollywood spirit than Lim allows. Furthermore, Boyle’s anarchically sensual style is actually subversive in the Benjaminian sense.

Indian cinema has constructed a largely phantasmagoric national identity by eliding cultural differences between the nation’s myriad ethnic groups. For the newly urbanized populations of India’s cities, the cinema is a kind of transcendental homeland, a medium of authenticity in a chaotic, partially Westernized culture. None of this authenticity came from a “realistic” portrayal of Mumbai or any other place in India. Its source is in the act of watching a film itself.

Slumdog’s “jacked-up camerawork and [ . . . ] cool, cosmopolitan pop of M.I.A.” (Lim’s description) announces that Boyle is no Mike Leigh. Walter Benjamin argued in “The Work of Art in the Age of Mechanical Reproduction” that the rougher edges of filmic technique have the effect of opening up reality. Film is “dynamite at twenty-four frames per second,” he writes. The audience sees what it had overlooked in its own environment. Things that were far away are suddenly thrust in front of the eyes (the violence of Mumbai slums). Things once close at hand seem far away (Bollywood style). At the same time film audiences get an object lesson in the malleability of the ways in which they construct their own realities. Everything becomes provisional. The meaning of everything depends on where you sit.

The malleability of the real can be seen in Madhur Singh’s report from New Delhi on Slumdog Millionaire’s reception in India. A public relations exec stomped out of a screening, complaining that the reality of Mumbai was too close. “You can’t live in Mumbai without seeing children begging at traffic lights and passing by slums on your way to work. But I don’t want to be reminded of that on a Saturday evening.” A business manager didn’t like to be reminded of “well-worn clichés about India.” But a driver shrugged, “If it’s set in a slum, there’s going to be garbage,” adding, “It’s those who are making lots of money who are cribbing about the film showing the dark side of India. Those left behind are loving it because they can empathize with the film’s hero.”

Slumdog Millionaire is open to too many interpretations because it doesn’t fit into established forms. It isn’t a colonialist drama like A Passage to India; nor is it an impeccably post-colonialist film like Mira Nair’s Salaam Bombay. Boyle has created a world that is both an exotic elsewhere and uncannily familiar. Even Alice Miles is forced to admit, “Boyle’s most subversive achievement may lie not in revealing the dark underbelly of India – but in revealing ours.”