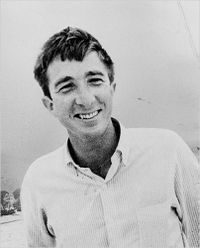 I first read John Updike in high school, when I was just learning the American literary landscape. I already knew about Hemingway and Faulkner and Fitzgerald from my English classes. Most literate households in my suburban Chicago town possessed at least one Saul Bellow novel. Somehow a paperback copy of Rabbit Is Rich ended up in my hands, and a whole new district in the literary landscape opened up for me, one that was much closer to home, even closer than Bellow.

Bellow was an urban writer, like many other names I was just coming to know. Hemingway was from nearby Oak Park, where I had relatives, but he wrote about very distant landscapes. Ditto Fitzgerald, and Faulkner more so. Later, in college, I would pick up Gabriel Garcia Marquez, who introduced me to an entire hemisphere, but one that seemed scarcely of this planet.

But Rabbit Angstrom drove a Toyota and read Consumer Reports, like many of the adults I knew. (My parents were Ford and Time people.) He worried about the state of the world, but from the perspective of a guy having a beer after mowing the lawn. Some of Rabbit’s worries were Updike’s attempts to capture the zeitgeist. Others were prescient. Rabbit says early in the novel, “’I figure oil’s going to run out about the same time I do, the year two thousand. Seems funny to say it, but I’m glad I lived when I did. These kids coming up, they’ll be living on table scraps. We had the meal.’”

As I made my way through Updike’s novels and short stories, I encountered again and again places as drab and commonplace as those I inhabited, yet rendered with a voice both lyrical and knowing. Updike created worlds that were perfectly ordinary and charged with meaning, and, in fleeting moments, with beauty. His was an exquisite sensibility at home in the mundane, a position that struck me, in my early adulthood, with existential force. He demonstrated you could gaze upon your suburban cul-de-sac with the eyes of Henry James. No one else I’ve ever read could yoke together erudition and domesticity like Updike. His form of sophistication was much more accessible than Bellow’s, more contemporary and broader-minded than Hemingway’s. Updike’s was the first adult view of the world I encountered that I could make my own.

To be sure, there were ponderous aspects to Updike’s fiction as well. In contrast to Dickens’s characters, who were great engines of purposefulness, Updike’s characters tended to meander, as equally likely to end up in a gas station as in church. Compared to the grand adulteries in Tolstoy and Flaubert, Updike’s adulteries were the distracted gropings of suburbanites with too little to do. For all his felicities with the American sentence, he never created a character remotely like Emma Bovary. And, like any prolific writer, from time to time Updike threw one to the backstop. (See Terrorist and its predecessor in strained topicality, The Coup.)

Of all American writers, Updike’s biography was the most analogous to my own—or, more accurately, analogous to the one I wanted to have. My urban sojourn was a lot longer than his, but now I find myself living in an Updikean house: a modernist-style split-level built in 1955 (the year after Updike’s graduation from college) in an affluent suburb abutting a large body of water—a Tarbox of my own. There’s even an enigmatic object left over from house’s original owners that Updike would have appreciated. In the laundry room there’s a metal cabinet labeled in hand-painted red, Buddy’s Boudouir (sic). The cabinet hangs beside the door to the family room, which, when we purchased the house a year ago, was still furnished in a manner immediately recognizable to the characters in Couples. The cabinet was empty when we found it, but I suspect that it contained Buddy’s porn, which he whipped out when the right company came over, as Piet Hanema might have done. Maybe the cabinet even contained a Krugerrand or two, which Rabbit used to shore up his wealth and as a sex aid.

With Updikean irony, we now use Buddy’s Boudouir to store laundry detergent and other cleaning supplies. It occurred to me that I should keep my collection of Updike books there instead. But no. His books will remain upstairs in my main bookcases, along with Raymond Williams and Walter Benjamin and Samuel Beckett and Don DeLillo and all the other people I’ve met since I opened up Rabbit Is Rich.