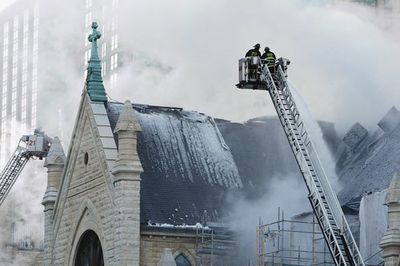 Why are churches so vulnerable to fire? The Holy Name Cathedral, seat of the Catholic Archdiocese of Chicago and located in the posh Near North Side, caught fire early this morning. Presumably the fire had something to do with the renovations going on inside the church after a piece of decorative woodwork fell from the ceiling last year. The fire was under control by 8 AM, and most of the damage seemed to be water damage from the fire hoses. Firemen had to punch holes in the roof of the structure to fight the fire, but the roof can be easily repaired.

A big loser in the fire is Cardinal John Cody. As part of the renovations his massive wooden crest, mounted in 1968, was taken down because it was basically pulling the entire structure down with it. Then, in this morning’s fire his hat got all wet. All five big red cardinals’ hats, or galeros, suspended from the ceiling, were soaked. Each hat commemorated a dead cardinal.

The Holy Name Cathedral was built in 1875 after the Cathedral of Saint Mary and the Church of the Holy Name were both destroyed by the Great Chicago Fire in October 1871. Today’s fire damage follows severe flood damage to another Chicago-area landmark building, the Mies van der Rohe-designed Farnsworth House last month when a freak warm spell melted a foot of snow. (My basement flooded, too.)

One more word about the photograph above, from the Tribune’s coverage of the cathedral fire. It’s three degrees Fahrenheit as I write, and if the wind was blowing anything like it was yesterday afternoon when I happened to be walking by Holy Name Cathedral, it’s bitter, bitter cold.