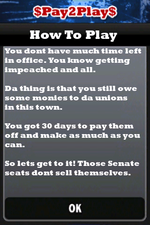 I still don’t have an iPhone. Right now I’m stuck between waiting for the next generation of iPhone (the “2,1”) and getting one now before they become passé. (One friend hints that they may already be there). In any case, I’m also still trying to arrange my own personal stimulus package, so no major purchases are imminent.

It’s too bad because the iPhone is still the closest gadget to my dream object: a Moleskine with OSX. When I do get around to buying an iPhone I’m going to buy Pay2Play. The game was developed by Juan Rubio, a native Chicagoan now living Vancouver. Based on the old DopeWars game, you play an Illinois governor with 30 days to go before your impeachment. You wheel and deal Senate seats and other state jobs for cash and favors.

Apple says it needs an “unexpected additional time for review” before it can approve Pay2Play for distribution on its app store, so I’ve not been able to ascertain the veracity of the game. The idea of an Illinois governor frantically trying to sell a Senate seat before he has to escape the state is realistic, but I don’t know if the game also comes with delusions of grandeur, a harridan of a wife, and Gary Cooper movies on endless loop. Also, because Pay2Play is a computer game, it has to have a goal. In real Illinois politics, pay to play is an end in itself, for the goal is not to escape but to stay exactly where you are, as if political clout will fend off death. This is, for instance, the strategy of Cook County Board President Todd Stroger, known locally as Urkel for his bespeckled, chirpy-voiced imitation of his late father, master pay-to-player John Stroger.

I don’t know that being Rod Blagojevich is anyone’s idea of a good time, even in a 3×4 inch space. But computer games are like dreams: the symbolic resolutions of waking life problems. Pay2Play replays the experience of turning something intangible that you already have (your social network) for something more tangible (economic security) before economic disaster strikes. The game isn’t about unseemly yet comic political favor-trading; it’s about mastery and control. After all, Blagojevich knew he was eventually going to lose his job, too, one way or another.