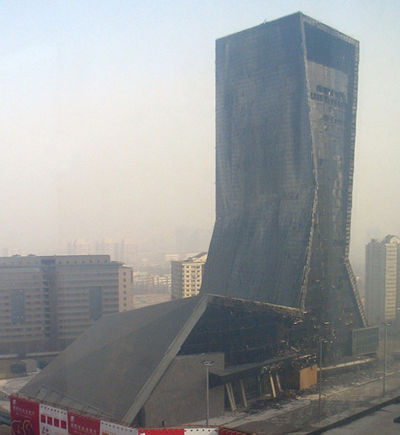 Now that the smoke has cleared from the Television Cultural Centre (TVCC) fire in Beijing, the damage is startling, almost ghostly. John Hill at A Daily Dose of Architecture found some photos fresh from the police lines. All that’s left is a charred hulk outlined in Rem Koolhaas’s trademark jagged edges. Photographed against Beijing’s pervasive smog, the tower looks less like it caught fire than it was dissolved by a noxious cloud. Like it’s slowly getting sucked into some ongoing ecological disaster.

The Office of Metropolitan Architecture has, so far, been at a loss for words. Koolhaas’s architecture is so inorganic that it’s hard to understand how the TVCC could be destroyed by something so elemental as fire. The building’s relationship to its more celebrated companion, Koolhaas’s CCTV Tower, has irrevocably changed. Before the fire the smaller TVCC building seemed warped by the vortex created by the CCTV Tower. Now the TVCC will be associated with folly—the only fatality was a firefighter dispatched to fight a fire caused by a criminal level of stupidity—and bad luck. Image spending the night in a building that was nearly vaporized by a few firecrackers.