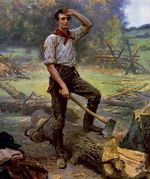 Today is Abraham Lincoln’s 200th birthday (and Darwin’s 200th as well). Here in Illinois, the Land of Lincoln, I expected the state to do more to mark the occasion, like having schoolchildren wear chin beards, or at least give them the day off. But they have to wait until Presidents Day on Monday like everody else. Make no mistake, though, Lincoln is still an important figure here. Travel the state and every other small town will have something to commemorate a visit by Abraham Lincoln, even if he only stopped long enough to blow his nose.

It seems that the pantheon of exemplars for small children has gotten pretty crowded, so Honest Abe doesn’t loom so large in young Illinoisans’ imaginations. When I was a kid, we learned about Lincoln as we would a secular saint. First we read the illustrated biographies. Even as a boy he was tall and grave, as if he were already brooding over the losses at Antietam. He split rails, apparently day and night. If his parents or siblings ever appeared in these illustrations, I don’t remember them. He seemed to be raised by chickens. Our teachers emphasized how young Abe had only a small chalkboard to write on and he had to sharpen his pencils every night with a knife. And here we were, with our electric pencil sharpeners and our cushy pads of lined paper, left to wonder why he needed sharp pencils when he had a chalkboard.

When we got old enough, there were long field trips to Salem and Springfield. The Honest Abe story was enhanced by sacred objects, or at least faithful reproductions of sacred objects. Here is an ax, just like one Abe might have used. Here is the inkwell we think Abe used to sign legal documents as a lawyer. The lesson was clear: through hard work and perseverance, we too could escape frontier squalor and grow up to live in a big house with nice linens in a really boring town.

There was one Abraham Lincoln, and he was one of us. He once stood where I stood and he went on to right a great wrong and change world history. Now there’s a Lincoln for everybody: the proto-Obama Lincoln, the racist Lincoln, the gay Lincoln, the man’s man Lincoln, the crybaby Lincoln, the henpecked Lincoln, the fetishized object at the center of the Civil War memorabilia industry Lincoln. Honest Abe has really gone big time, and that’s good. I’m glad to see, though, that amongst these new Lincolns there endures an old one: the Lincoln who was the source of luminous language, the melancholic who wrote with biblical directness about catastrophe, unfathomable loss, and triumph.