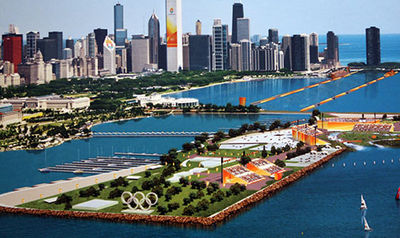 Chicago’s bid book for the 2016 Olympics has just been opened up for the public. The bid book is a high level plan and not an architectural design, but as it stands the bid doesn’t look very ambitious from a design and urban planning perspective. The city’s sales strategy seems to be this: we already have the basic infrastructure, a tradition of getting things done, a commitment to sustainability, and a TV-ready setting of a colorful skyline in the background and a big blue lake in the foreground. The city is billing its Games as “blue-green.” As far as our rivals are concerned, Tokyo promises to be techno-green and Rio counters with Copacabana-green, while Madrid is going skinflint.

The details of Chicago’s plan, however, are troublesome. First of all, it looks like the Walter Gropius buildings at the Michael Reese campus are going to be demolished, probably for the same reasons that mid-century modern buildings so often become victims of teardown projects. Over the past few years classic modernist design has lost cache to green architecture, even though mid-century modern buildings were often green. Gropius’s Reese buildings, for instance, were designed to provide shade during the hottest part of the day, then let in sunlight during the cooler morning and early evening hours. In certain ways, mid-century buildings were too successful at limiting wasteful consumption. Scaled to the human body, they’re too small to accommodate the massive furniture and resource-sucking electronic systems that have caused so much concern among sustainability advocates. Some of the wizardry of green technologies is designed to compensate for patterns of consumption that modernist minimalism would never let into the house in the first place.

And while we’re on the subject of architecture, the 2016 bid book indicates that we shouldn’t expect any eye-popping displays of design flamboyance like we saw in Beijing last summer. Arguably, Beijing had a lot to prove, so it needed all that flashy architecture. Chicago’s more modest designs could be seen as a sign of maturity. But it’s also worth noting that the 2016 Olympic proposal builds upon two planning projects from Chicago’s go-go days, when it was still trying to wash off the stink from the stock yards. The Olympic venue plan essentially follows the basic outlines of the 1893 Columbian Exposition and the 1909 Burnham Plan. All those skyscrapers framing the Olympic venues are the result of Chicago’s century-long competition with New York City to have the tallest building in the world–a prize that both cities have ceded to up-and-coming Asian cities.

Chicago’s bid is pragmatic, business-like, and a little dull–blue, green and beige. And while the plan won’t leave the city with any enduring architectural or urban planning legacies, the “yeah, we got that” approach has a significant practical shortcoming. City officials bravely decided to stick with the city’s creaky public transportation system even though the inadequate transport was one of the IOC’s initial objections to Chicago’s bid. The city’s transport systems converge west of the Loop, leaving people to elbow their way through the city’s most congested streets to the lakefront venues. I guess making people walk six or seven blocks to the lakefront is all part of the “blue-green” Olympic experience.