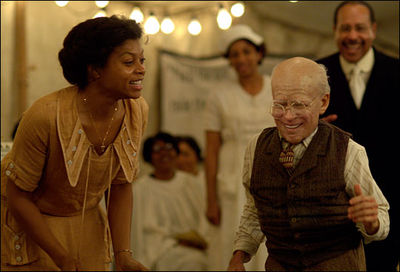 F/X people have long been talking about completely synthesizing an actor’s performance in a film. The Curious Case of Benjamin Button comes closer than any American film so far in presenting a totally digital actor. A digitally recreated Brad Pitt appears in fifty-two minutes of the film, most of them in the first third of the movie in which he plays a wizened gnome. There’s no body in the frame, just pixels. Benjamin Button is the first film to cross what Japanese roboticist Masahiro Mori calls the “uncanny valley” populated by zombie-like simulacrums of the human body.

The question, of course, is how far this is all going to go. Technically speaking, it could go all the way, at least in certain genres. Clark Gable and Rita Hayworth could be lifted from celluloid and granted starring roles, with Richard Jenkins in the background to add more verisimilitude. But the Hollywood star system is more than just actors on the screen. The entire celebrity culture industry depends on live people popping up out of limousines to the flash of cameras or getting arrested while driving drunk in their own cars. It has no use for a resuscitated Rita Hayworth. How many people under the age of 30 would recognize her anyway? Fifty years from now, when Brad Pitt really looks like a wizened gnome, who wants to see him on the screen decontextualized from Angelina Jolie and his odd hairstyles?