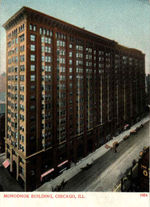 John A. Holabird, the grandson of the early modernist architect who co-founded the
Chicago-based architecture firm now known as Holabird & Root in 1880, died
Monday at age 88. Holabird & Root were responsible for some of the most important buildings in the city, including the south half of the Monadnock Building (1893, at left), the Marquette Building (1895), the Cook County Courthouse/Chicago City Hall complex (1910), and the original, and now defaced, Soldier Field (1924). John A. Holabird was active in the firm starting in 1955, when the firm produced a long series of workmanlike buildings, with only the Foellinger Auditorium Addition at the University of Illinois/Urbana (1985) standing out as a distinguished design. Holabird retired two years after that building was completed.