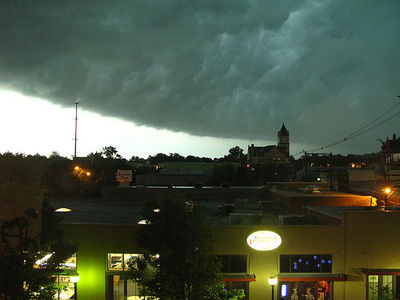 This Oscar season I feel like I’ve been watching a big-budget disaster film, one of those eye-searing explosion flicks that kick off the summer movie season. But I’m sitting in a center seat in the front row, and I can’t get up to get popcorn or go to the bathroom. And everyone I know is in the film. Call it The Great Recession.

This movie is the Best Picture.

And here are my awards for all the other categories.

Best Director: Alan Greenspan, for refusing to raise interest rates to cool off the overheated housing market. Where are you Paul Volcker?

Best Actor: Treasury Secretary Timothy F. Geithner, for his “I really have no idea how to fix this problem, so I’m keeping all my money in my mattress” performance while announcing the bank rescue package.

Best Actress: Sarah Palin, for her “I gonna shoot me an economic plan as soon as huntin’ season opens” website. Runner up: Kate Winslet, for her performance as an illiterate Nazi that was nearly as good as Palin’s.

Best Supporting Actor: John Boehner, for his role as a Republican. Runner up: Mickey Rourke, for demonstrating that one can make a comeback after having his entire career repossessed.

Best Supporting Actress: Carly Fiorina, for following up her incompetent leadership of HP with her awesomely wrong-headed economic advice for John McCain during his presidential election campaign. Runner up: Marisa
Tomei, for also playing a character expert at faking something people desperately want to believe is real.