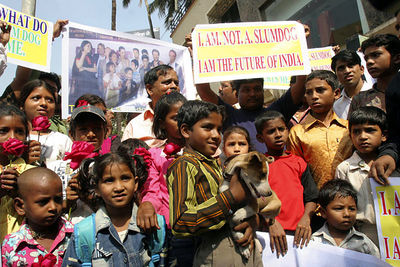 It’s been years since I worked in Schaumburg, one of those allegedly bland, homogeneous suburbs everyone complains about. The presence of several high tech companies in the town means there’s a lively if somewhat transient Indian population serviced by some very good Indian restaurants and grocery stores. I no longer have access to the Indian food ingredients I used to be able to pick up there during my lunch hours. That’s unfortunate, because I’m contemplating making Indian food for our little Oscar party tomorrow night. Partly it’s in honor of Slumdog Millionaire, and partly because a hearty chicken curry dish–paired with an excellent Washington State merlot I recently discovered with the cheesy Bollywood name of The Velvet Devil–is the perfect comfort food when there’s 8 new inches of snow on the ground.

My Indian meal will be inauthentic, of course, but I don’t particularly care. Slumdog Millionaire itself, as we’re reminded again and again, doesn’t present an authentic image of Dharavi, the slum in which much of the action of the film takes place. I defy anyone to come up with a single film ever made anywhere that is absolutely ethnographically and/or historically accurate. The New York Times‘ Room for Debate feature tries to discern the reasons behind the protests in India over Slumdog. First, there’s the inaccuracies in the film’s portrayal of Dharavi: it’s actually an economically vibrant community; it’s not really next to the Mumbai airport; not every scene set in Dharavi was actually shot there, although many of them were.

Then there’s the term “slumdog,” which has prompted violent demonstration by Hindu nationalists and at least one court case. Chitra Divakaruni points out that the term is only used once (more than once, as I recall, but her point’s the same), and then by a villain, so its use is entirely consistent with Bollywood conventions. Amresh Sinha says the protests are being stirred up by Hindu nationalist parties trying to get out the vote. “If ‘Slumdog Millionaire’ were a big flop, would there have been any protests in India?” he wonders. Probably not.

So, getting into the Hollywood–and Bollywood–spirit, I’m not going to worry about authenticity. I’ll serve chicken curry my own way, which may or may not be the way somebody in India prepares it, and watch the Oscars without worrying about any protests across the globe. I will, however, have to be concerned with the protests from my four-year-old son and two-year-old daughter, neither of whom will eat spicy food in any form.