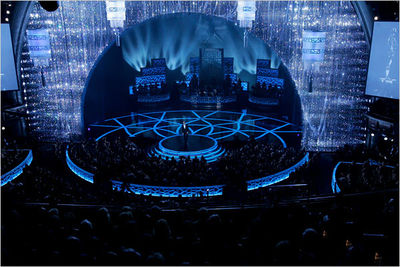 First of all, in case you were wondering, the curry turned out pretty well. I threw in some curry leaves for the first time, and that seemed to make a difference.

The first architectural Oscars were, I think, largely successful in restoring some of the theatricality of pre-television Oscar ceremonies. The actors on stage seemed more corporeal than in previous shows, when people on stage appeared to float in a CGI space that was more PhotoShop than CinemaScope. I liked seeing people ducking into their seats after the commercial break. And I liked seeing Brad Pitt and Angelina Jolie stuck in theirs all night.

Hugh Jackman was okay, I guess. The snarky comedians of the past 30 years had worn out their welcomes, but Jackman struck me as being more intent on distracting us than acting as host. I would have thought that a genuine song and dance man and a Broadway set would have improved the musical numbers, but they only got shorter, not better. For the first minute or so I sort of enjoyed watching Beyoncé—she was sporting some thighs, to be sure—but the piece quickly devolved into a series of non sequiturs in the typical Oscar fashion.

Natalie Portman, the geek princess, had an unexpectedly funny line, probably the funniest she will ever utter in her lifetime. Without a doubt the best couple of the night was Tina Fey and Steve Martin. Too bad the entire show couldn’t have sustained their disciplined wit. I know Mickey Rourke was a sentimental favorite, but he made me cringe. I didn’t know what to make of that black fez on Philip Seymour Hoffman’s head.

Speaking of heads, the new format of having five old heads on stage introduce the nominees in the acting categories worked the first couple of times, when they were talking about Penélope Cruz and Heath Ledger. But by the time they got to the best actor award, the presentation seemed awkward and forced, with each actor assigned his own personal living, speaking Oscar statute. They might as well have had their publicists up there.

The most shocking moment of the ceremony had to be the best foreign language film award. This is a notoriously unpredictable category, but Departures? First Matteo Garrone’s Gomorrah was snubbed altogether, then The Class and Waltz with Bashir get passed up. The audience seemed stunned when the Departures people collected their Oscars. I certainly was.

Generally, though, the favorites won, including, of course, Slumdog Millionaire. I think you can tell how the best picture producers view their films by the way they accept their awards. The producers of Crash were prickly and defensive–and as surprised as anyone in the house. In 2003 The Lord of the Rings people were wandering around, saddened that the biggest project they would ever work on was finished. Despite Christian Colson’s rather glum acceptance speech, Danny Boyle and his Slumdog Millionaire crew had a collectivist spirit that countered the soothing narcissism of the acting awards. The sight of the large cast on stage at the Kodak Theater recalled the dance number during the film’s closing credit sequence, which, I think, was responsible for catapulting the film into best picture territory. The “Jai Ho” number pulled the film together, just like Slumdog did for the entire Oscars broadcast.