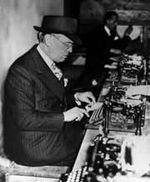 Guys and Dolls is back on Broadway, which means Damon Runyon is back, sort of. The play was something of an anachronism when it debuted in 1950, and so was its titular author. Nevertheless, Guys and Dolls has remained in the standard American repertory, while Runyon is still in print but nowhere near the popular figure he was in the 1930s. Musicals never seem to die, but what happens to writers of popular fiction? Why do they fall out of favor and rarely, if ever, return?

Yesterday I temporarily put aside Roberto Bolaño’s 2666 for reasons I’ll get to in a future post, and, to cheer myself up, I started rereading Dickens’s Bleak House. (Yes, it was that kind of day.) Dickens and Shakespeare are the prototypical populists with enduring literary reputations. Reading the incredibly sensuous opening pages of Bleak House (“Fog everywhere. Fog up the river . . . . fog down the river . . .  fog on the Essex marshes”), it’s easy to see why Dickens was so popular at the time, and why he’s still highly regarded.

Compare Dickens’ description of fog to this line, which Adam Gopnik picks out as the reason we read Runyon: “If I have all the tears that are shed on Broadway by guys in love, I will have enough salt water to start an opposition to the Atlantic and the Pacific, with enough left over to run the Great Salt Lake out of business.” This is vivid, to be sure, but I don’t think this is such a great sentence. There’s tough guy New York slang just under the surface, but the sentence is at least one clause too long to be witty.

The referent for this sentence is an entire way of speaking, one that flourished in New York between the wars, then disappeared. Gopnik does an excellent job of explaining how Runyon’s mock wise guy language works. Gopnik points out that highly slangy, urban speech is actually more complex, even convoluted, than standard American English. Runyon had a great ear for gangsters trying to sound classy because his own reporter’s prose aspired to the standards of genteel period of American literature. Runyon occupies a place exactly midway between Martin Scorsese and William Dean Howells.

Unfortunately for Runyon’s reputation, three developments occurred after World War II. Mobsters put away their two-tone shoes and turned into grunting ethnics, middle Americans found a new—and more standardized—voice in the chipper tones of 1950s television, and the crime genre evolved into something darker and more interior. After Runyon’s death in 1946 it was no longer possible to build a plausible fictional world simply by hanging out all day at Lindy’s restaurant, listening in on mobsters’ conversations, as Runyon did.

Language was pretty much all Runyon had going for him as a fiction writer. As Gopnik reminds us, his plots were creaky and his characters flat. A way of speaking died when broadcast media took over American popular culture, and Runyon’s world evaporated. It’s fitting, then, that Runyon endures now only in a play first staged four years after his death, a play known as the last musical comedy—the last of its kind.