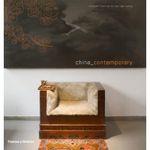 Reconciling traditional Chinese architecture and Western-style modernism is an enduring challenge, but a new generation of Chinese designers and architects seem poised to make some headway. Post-Olympic interest in Chinese culture has helped call attention to their efforts, even as the chew-it-up-and-spit-it-out approach to urban redevelopment has not been particularly supportive of good design. China has plenty of things to sell to us; does it have anything to teach us?

In their new book China Contemporary

Michael Freeman and Xiao Dan Wang consider the progress so far in developing a uniquely Chinese contemporary design aesthetic. Most of the projects discussed in the book are relatively small-scaled: a publishing house, some restaurants, several apartments. To help us distinguish what’s particularly Chinese about these designs, the authors—neither of whom actually live in China—have divided their book into four sections: Continuity, Color, Conversion, and Crossover. This schema provides a useful framework for contextualizing the authors’ survey of contemporary Chinese design.

Conceptually the weakest section is Color. Wang, who is responsible for the text, claims that northern Chinese urban spaces are colorful because northern Chinese women like to dress in bright colors to ward off the long, cold winters. Pretty much the same thing could be said of Sweden or Minneapolis. However, Chinese designers, it turns out, are drawn to white for the same reasons their Western counterparts are: it looks cool, and provides a striking contrast when adhering to the old interior design principle of having something red in every room.

In Continuity, Wang and Freeman show how traditional belief systems such as Confucianism, Taoism and Buddhism influence contemporary Chinese design. For instance, the minimalist color palette of the Green T house in Beijing—each room is white with one accent color—is supposed to exemplify the Buddhism idea of nirvana. The house is itself one of the most striking in the book, but nirvana, in its Western connotations anyway, seems too portentous an idea for such a conventionally modernist structure.

Conversion and Crossover leave behind the foggy mists of the past and examine how designers and architects are addressing design challenges posed by China’s current realities. Northeast Beijing has a plentiful supply of urban hipsters and East German-designed apartment blocks. Rehab projects generally start with a coat of white paint and go from there. The results are visually interesting, in a 1990s East Village loft sort of way. Fittingly, Crossover is the wildest and most uneven section, as designers grope for a more abstract and original union of the domestic and the foreign. Pearl Lam crammed sixty ideas into her Shanghai apartment that’s only big enough for a dozen ideas. The apartment would induce a headache in most people, but Lam seems to be trying to push through to something genuinely new. If Lam’s pieces don’t all work together, artist Shao Fan is even less successful placing a single object in his Beijing house: he has an elaborate traditional Chinese bed, one of those beautiful objects that are something of a burden, and not just because it’s the size of a camper trailer. He pushed it off to an unused corner of his house and stuck a clunky contemporary coffee table in front of it, hoping for some kind of synergy. Maybe you have to be there.

For all its prowess as a mass manufacturer of consumer goods, right now China’s most important contribution to design may lie in the small, artisanal object. Shao seems uncertain about what to do with a traditional bed, but he knows how to make a chair. The few exterior shots in China Contemporary show glimpses of unremarkable architecture. Interiors dominate throughout the book, as if each space was designed to keep out the malignant spirits of China’s hyper capitalism. Whether Chinese designers have come up with a larger solution to the implacable ugliness of the new urban spaces in China remains to be seen.