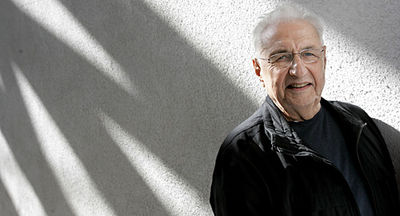 Frank Gehry turned 80 last Saturday, and he sat down with LA Times architecture critic Christopher Hawthorne to discuss the architect’s future in corrugated metal. Gehry has only one of his trademark buildings still under active construction—the Guggenheim Museum on Saadiyat Island in Abu Dhabi—and he’s still drawing up plans for his Dwight Eisenhower memorial proposal. Other than those projects, he’s not doing much these days. The Grand Avenue in Los Angeles and the Atlantic Yards project in Brooklyn have both been put on hold. This isn’t where he wanted to be at this point in his career. “All my life I’ve wanted to do projects like that, and they never came to me. And then all of a sudden I had two of them. I invested the last five years in them, and they’re both stopped. So it leaves a very hollow feeling in your bones.”

So it’s back to basics for Gehry. In the late 1970s he crawled out from under a big corporate developer by building with cheap materials, starting with his famous Santa Monica house. He says he’s ready to build that way again. “Today, if there’s frugality, I’m ready. I’ll do corrugated again.” Today there’s more than frugality, though. Building cheaply isn’t the point, even now. In order to justify a large-scale project—anything larger than a suburban tract house, say—the building needs a moral dimension. Build sustainable, build green, or shame on you. It’s as if we need to pay tribute to Gaia in order to purge ourselves of the bad debt choking the planet.

Talking to Hawthorne Gehry didn’t give any indication that he was heading in that direction. Instead, he wants to head toward the nineteenth century—to Paris. Like a lot of other people, he’s dusting off old fantasies of escape, but even someone still employed at the top of his profession feels trapped. “I love going to Paris, and I keep fantasizing that I’ll move there for the last years of my life. But I don’t know if I can do it. I think I’m stuck here, on 22nd Street in Santa Monica.”