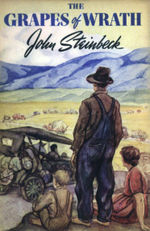 At the conclusion of FDR’s first 100 days in office, Sherwood Anderson left Damon Runyon’s wisecracking New York and embarked on a tour of dusty back roads and one-street towns across the American South and Midwest. New Yorkers had seen people leaping from buildings on Black Friday and lived with the galling sight of the destitute roaming the streets of Manhattan, but along country lanes of the American interior the economic collapse was both deadeningly familiar and starkly new.  Troubles with the banks were a constant threat to rural America, but shuttered banks on Main Street were something new. No one was around to repossess the farm, but neither was there anyone available to finance a new crop or a plot of land.

New York City was suffering from a nauseating churn, but the small town Americans Anderson encountered were nailed in place. Anderson explained that these Americans had lost their faith in a nation of opportunity for all, in a nation of seamless class mobility. It seems unlikely that class mobility was a very deeply-held belief among poor Southerners and Midwesterners. In fact, as Sean McCann points out, in the years leading up to the Great Depression, social inequality grew worse, not better. McCann writes, “Never in American history had the vision of social mobility been more forcefully asserted than in the 1920s. And rarely had the image been so far out of keeping with reality.”

Part of the myth of the Great Depression was that Americans flocked to movie theaters for high-gloss escapism. This is true, but only in part. Crime melodramas like The Public Enemy (1931) also flourished during the 1930s, just as crime itself did. Margaret Mitchell’s Gone with the Wind (1936) was a bestseller, but the decade also saw a spate of bitter realist novels, most notably John Steinbeck’s The Grapes of Wrath (1939). Between the Roaring Twenties and the Great Depression American movies changed because of a major technological innovation—the introduction of sound in 1927—but  American movies also changed thematically, and so did American art, architecture, and literature. The fey experimentation of High Modernism gave way to dour realism, the stream of consciousness was replaced by the camera eye.

McCann predicts that the Great Recession of the Naughts will produce a similar upheaval in American arts. He’s probably right, but it’s too early to spot any definite trends. The most emblematic film of 2008, Christopher Nolan’s The Dark Knight, evinces a post-bubble despair, but there are too many vestiges of Bush-era paranoia and callousness. Judgment is reserved for Jonathan Littell’s forthcoming novel The Kindly Ones, which is either a vast mess or a brilliant game-changer, depending on who you talk to. But from the descriptions of the novel, it sounds overwrought and perverse—Baroque, in other words.

In any case, I predict we’re not going to go back to a 1930s-style social realism. We may very well move in the opposite direction. I’ve been rereading Walter Benjamin’s writings on Baroque allegory, and it seems to me that we’re also entering a world in which once familiar things suddenly appear strange and alienating, and where there are so many competing orthodoxies that anything can assume any number of different meanings.