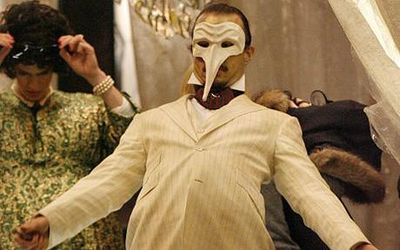 Years ago my family and I paid a visit to a distant cousin. He had recently graduated from Stanford’s MFA program in screenwriting. When we dropped by he was living in his parents’ house while waiting for a call from a studio interested in his script. I was just a kid and I’d never met anyone who had even thought about entering the movie business, so his life seemed pretty glamorous. All he could talk about, though, was a film called Zapped, which had just been released. The film was a Scott Baio vehicle about a teenager who could shoot bolts of electricity from his fingers–to what end I can’t remember. This is the only kind of film Hollywood is interested in making these days! my cousin said, over and over again. I never saw him again after that–he died of AIDS a few years ago–so my enduring memory of him was of a unemployed screenwriter whose whole world fell to pieces because of a single teen flick. The incident was also my first glimpse into what Hollywood does to people.

The movie business is normal only to the extent that it sometimes makes no sense at all. You would think, for instance, that after Heath Ledger’s tongue-darting turn as the Joker, and the Oscar that came with it, his last film would be a hot property. Not so. The Imaginarium of Dr. Parnassus, in which Ledger plays a man who travels through dreams, can’t find an American distributor. The film’s director, Terry Gilliam, has never had the best of luck, but it seems surprising that a studio like Lionsgate, which is supposed to be stock full of marketing geniuses, doesn’t pick up the film and sell it as a sort of live action Coraline.

Meanwhile, over at GreenCine, Craig Phillips recounts his difficulties selling his screenplay about World War II. “Even before the economy went Apocalyptic,” Phillips writes, “Hollywood studios were
increasingly gun shy about committing to anything without an existing
franchise behind it — a book or magazine article is preferable to
anything created solely out of writer’s imagination, for instance.” One would think that World War II is a sort of franchise in itself, but I guess not. In any case, it looks like not much has changed since the days of the Zapped auteurs.