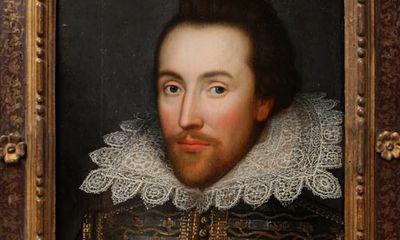 I’ve never been one to pay much attention to scholarly disputes about the authenticity of this or that text or object (“I’ve proven once and for all that this is indeed John Milton’s spittle.”), but Shakespeare is something of an exception for me. Charlotte Higgins has looked over the evidence for the claim that the Cobbe portrait (above) is a painting of Shakespeare, and she’s not convinced. Stanley Wells, the former Director of the Shakespeare Institute, claims that another supposed portrait of Shakespeare was copied from the Cobbe, but the copy, called the Janssen portrait, is known to have been altered in the 1770s so that it would look more like Shakespeare. Anyway, the net result is that Shakespeare would have had to have aged backwards, starting from the 1770s, to make the Cobbe portrait viable. The few verified images we have of Shakespeare have a Byzantine iconographic formality about them, making him seem even more remote in time and place than he actually is. The Cobbe portrait is naturalistic, with a youthful, vigorous Shakespeare gazing calmly back at us. Too bad it’s not him.