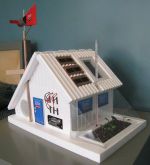 Walter Benjamin was interested in what he called the physiognomy of the thing world. He used one of his most distinguished critical facilities, his “microscopic gaze” into the forgotten remains of the past, in order to construct an image of a society suspended in a collective dream. Small things revealed the intersection between technological and social progress on the one hand, and on the other,  unresolved collective wishes that have calcified into myth. Most commonly, Benjamin argued, these mythic fantasies revolved around a classless society of endless abundance. The movie Wall-E is a sort of Benjaminian parable about discarded commodities and our barely conscious but shared desire to have our possessions serve us, rather than the other way around.

Particularly fertile ground for Benjamin’s physiognomic analysis were toys. During his 1927 visit to Moscow Benjamin bought a number of Russian folk toys, which he regarded as remnants of a disappearing folk culture, products of a cottage industry about to be subsumed under mass industrialization.

I think he would have also been interested in toymaker Thames & Kosmos‘s Power House: Green Essentials Edition. Kids can construct a model house and furnish it all the latest green technology appliances, including “a lemon battery,” whatever that is. The Power House is a combination of an old chemistry set, a Lost episode, and much else besides. Kids are supposed to experiment with the appliances while they “read the diary entries of a group of young explorers who are learning
to live a sustainable existence on an island. To survive, they must
implement real-world versions of the projects you are doing in the kit.”

The old chemistry sets were about self-improvement; they were supposed to turn you into a scientist. Now kids have to save the whole planet before they can save themselves. Or maybe the message is exactly the opposite: Your suburban neighborhood of neo-Tudor houses can’t be redeemed, so it’s best to move to an island and start all over again. In any case, the project is straight out of Robinson Crusoe: inside every one of us is a perfectly rational, orderly republic that can be reproduced anywhere, under any circumstances. The Lost narrative is just a more accessible version of the Crusoe story, which is also a rescue story. As perfect as Crusoe’s world is, he still needs to escape from the madness of isolation.

The Power House’s fusion of science and narrative is its most meaningful element. The combination indicates how far green technologies have moved beyond merely lessening our dependence on foreign energy sources and reducing greenhouse gasses, especially now that green technologies are such a prominent part of Obama’s stimulus package. Green technologies are moving further into the realm of myth. Specifically, they’re no longer just about lowering our electricity bills, but they’re about redeeming us from our collective follies.