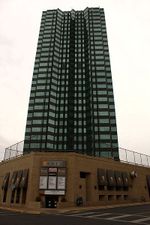 Name one thing from the 1970s that still has some vitality in our culture. Star Wars continues to have a cult following, but if the 16-bit original had been the only installment, it’s unlike anyone would care much now. Platform shoes are back, or will be shortly, but they’ll be gone again soon enough and no one will miss them. Frost/Nixon was a hit, but everyone still hates Nixon. We don’t even want to compare our current economic troubles to the doldrums of the 1970s. We’d rather flirt with a Great Depression than suffer another spell of stagflation.

Architecture from that decade hasn’t fared much better. There’s Frank Gehry’s path-breaking Santa Monica house, but we’ve absorbed its lessons and poor Frank Gehry is still stuck there. There’s the Sears (oh, crap, now Willis) Tower in Chicago, perhaps the only artwork to have transcended its time and come out the worse for doing so. When was the last time you saw a photo spread of a remodeled 1970s house in Dwell? Probably the last time you saw a brown plaid skirt in Vogue. Tom Dyckhoff, the architecture critic for the London Times, calls 1970s architecture “a hiatus between the fag end of
postwar modernism and the Day-Glo joviality of 1980s postmodernism,” and indeed, most of the distinguished examples of 1970s architecture are either last gasps from mid-century modernism or objects out of Learning from Las Vegas

The issue of 1970s architecture will become a more pressing one because thirty years is the minimum age for many preservation ordinances. More and more communities will have to ask themselves about what to do about the brown glass box in the corporate center or the house down the street with the Expressionist shingles. In Britain the
Twentieth Century Society is sort of the ACLU of Modernist architecture, doggedly defending the decade’s buildings from the wrecking ball even when no one loves them. There’s no equivalent organization stateside that I know of, but pretty soon preservationists will be faced with these questions: is a building worth saving only because it was built at a particular time? If we tear down all our 1970s buildings because we don’t like them now, will we be sorry later?