Last Saturday my wife and I were having lunch in a café on the rue des Francs Bourgeois when my wife said, “Paris is the city I feel most at home in.” I felt exactly the same way, and yet I was consistently surprised whenever I saw signs of ordinary life in Paris: people walking dogs, people using cafés as offices, children playing in the Place des Vosges, the crush of shoppers in the Monoprix on the Boulevard Saint-Germain. Surely no one really lives in Paris, just as no one really lives in Venice or Florence. And yet, here they were: Parisians going about their business. Paris is both a dream city and a “landscape built of sheer life,” as Hugo von Hofmannsthal once described the city. Walter Benjamin traced origins of this double quality of Paris—both real and ideal—in the passages, built in the early nineteenth century. Benjamin saw the passages or arcades not only as the first covered shopping malls, but as a whole new kind of space in which the intimacy of the middle-class home was extended into the public space of the street. The arcades were

the dwelling place of the collective. The collective is an eternally unquiet, eternally agitated being that—in the space between the building fronts—experiences, learns, understands, and invents as much as individuals do within the privacy of their own four walls. For this collective, glossy enameled shops signs are a wall decoration as good as, if not better than, an oil painting in the drawing room of a bourgeois; walls with their “Post No Bills” are its writing desk, newspaper stands its libraries, mailboxes its bronze busts, benches its bedroom furniture, and the café terrace is the balcony from which it looks down on its household [. . .] More than anywhere else, the street reveals itself in the arcade as the well-furnished interior of the masses. 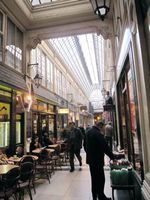 The Paris arcades were the first places in which it was possible to feel at home in public space, an experience still possible in the city’s cafés, museums, and boulevards. It was this experience that my wife and I enjoyed sitting in a sidewalk café in the Marais, sheltered from two downpours and an early spring chill by a motor-driven awning that expanded or contracted with the changes in weather.

But the experience of sitting in a sidewalk as if one were sitting in one’s own dining room requires something less tangible than a flexible awning and a half bottle of Languedoc wine. Benjamin noted that the “arcades are houses or passages having no outside—like the dream.” Paris is enclosed by the périphérique, the ring of boulevards that define the city limits, at least as far as its residents are concerned. It is a city with no outside. It’s a “protected territory,” says The Economist’s Paris bureau chief Sophie Pedder, “kept alive and preserved by real Parisians.” She writes, “I love the way that this Paris has hung on to a way of life elsewhere long gone: the small movie houses, the family-run booksellers.”

This sealed-off quality of the city is why, I think, one remembers the small details more vividly than the grand monuments. It’s why every tourist (including me) takes a picture of the Eiffel Tower even though it’s already the most photographed object in the world: one is more likely to forget the tower than the sight of a worker carrying three baguettes home at dinnertime. It’s the fleeting experiences in public space that make the city so hard to leave, and why it lingers in the mind like a dream.