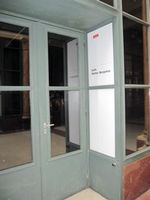 In the Galerie Vivienne, just off the rue des Petits-Champs, there’s something called the “Salle de Walter Benjamin.” I was disappointed to find it closed and, apparently, empty, but perhaps it’s appropriate that Walter Benjamin should be a ghostly presence in the Paris arcades, for the Arcades Project, or Passagen-Werk in German, was Benjamin’s last, great, unfinished work. (For more photos and another introduction to Paris arcades, go here.)

Strictly speaking, the Arcades Project is a stack of notes, over 10,000 quotations and observations, most of them created during Benjamin’s research in the Bibliothèque nationale, which, during the 1920s and 30s, was located near the arcades. The Arcades Project is a social and cultural history of Paris in the nineteenth century. It is an “ur-history,” a history of the origins of Benjamin’s own time of economic collapse and political crisis. The project included a history of visual and pre-cinematic technologies, and out of this research came Benjamin’s best-known work, “The Work of Art in the Age of Mechanical Reproduction,” arguably the most important single essay on media culture. 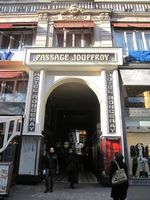 Built in the early nineteenth century, the arcades were the first covered shopping malls, the first use of glass and steel (actually iron) construction. They were the first enclosed, artificial environment. When they were built they were among the most fashionable places in Paris. Right where the salle de Walter Benjamin now stands Hector Berlioz led crowds in singing “La Marseillaise” to celebrate the revolution of the July monarchy in 1830. By 1926, when Benjamin first walked through them, they were dilapidated, fragmented (some of them were torn down to make way for the Boulevard Haussmann), and virtually forgotten. For Benjamin the experience of walking through the arcades was a Proustian exercise in involuntary memory, except, instead of personal memories, the arcades were a storehouse of collective memories. The Arcades Project, similarly, would present a collective history of the city, but instead of trying to recreate exactly how life had been lived in nineteenth-century Paris, Benjamin would present  “life as it has been forgotten.”

Originally Benjamin was going to write another of his “city portrait” essays in which he immersed himself in the experience of walking through a city. In “Naples,” for instance, he found a “porous” city in which the boundaries of modern capitalism–between public and private, labor and leisure, personal and communal–have not yet been established.  His background research in the arcades soon took on a life of its own, and he began classifying and expanding his notes into a set of themes: fashion, boredom, Haussmannization, Baudelaire, the flâneur, among many other topics.

Benjamin dropped the project for a few years, and when he resumed work in 1934 he had a more rigorously philosophical project in mind, which he called “A Dialectical Fairy Scene.” His work was funded by Adorno and the Institute for Social Research, so Benjamin adopted the Institute’s Marxist-inflected approach. The Arcades Project would center around the study the “fetish character of the commodity” and the ways in which all twentieth-century capitalist culture could be seen in embryonic form in the early arcades.

Around 1935, as his research efforts continued, Benjamin focused on a more manageable topic: Baudelaire and his update of Baroque allegory. Baudelaire came up with the perfect representational technique for seeing the dead past within the living present. The arcades were perfect thing worlds, but they were small and modest in scale. They were superceded by the world exhibitions, by the great museums, railroad stations and airports, by the big department stores, and by the cinema. All of these spaces repeated the original arcades’ promise of a perfect thing world. 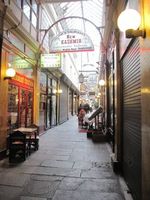 Benjamin argued that Baudelaire regarded each new innovation, each new promise of an ideal existence within consumer society, as a failed enterprise. Baudelaire regarded new commodities as already dead things. His allegorical poetry went to extremes to show how our desires for new goods are ultimately self defeating because soon enough our shiny new purchases will be forgotten junk stored in our attics.

But there’s a dialectical turn here: by embracing self defeat we actually get in closer touch with our shared fantasies and desires. The truth of our times then becomes clear: all those big suburban houses, all those urban condo conversions for which we paid bubble prices, all those perfect self-enclosed private spaces with home theater systems and restaurant-quality kitchen appliances, are now hollow spaces, as junked up and faded as the Paris arcades. All that’s left are the mortgages and the desire to feel at home while connecting to something larger than ourselves.