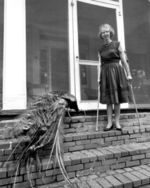 I’ve been reading a lot lately about the outsized, overcrowded lives of nineteenth-century French novelists: Alexandre Dumas keeping a tobacco jar full of cash on his writing desk for his friends to help themselves freely; Victor Hugo moving his entire family into elegant quarters in the Place des Vosges, and installing his mistress next door; Honore de Balzac hiding out from his creditors by living under an assumed name and admitting guests only when they provided the right password.

Then there’s Flannery O’Connor, who spent her entire life, by her own admission, “between the house and the chicken yard.” Her life started off promisingly enough: at five years old she appeared in a Pathé newsreel because she taught a chicken to walk backwards. But then at twenty-six she was diagnosed with lupus, so she was confined for the rest of her days in Milledgeville, Georgia, bickering with her mother, attending church, and romancing her peacocks.

in the latest issue of the Virginia Quarterly Review, Blake Bailey mines a good biography of a dull life for interestingly details. There are some: she went to a high school equipped with a shooting gallery, she refused to visit James Baldwin when he came to Georgia, and she hated every moment she spent at Yaddo. There’s the ill-fated smooch with a textbook salesman, a commonly-told story about her, as well as a sampling of her deadpan racism.

From this tiny life, we’re asked to believe, great art arose: “One can hardly stress enough that work was what mattered to
O’Connor,” Bailey writes, “whether as art for art’s sake, or the conversion of heathens,
or the salvation of her own immortal soul.” This may be true, but it’s also the problem with her fiction. Her prose is brilliant in small doses, but her characters are otherworldly, and not in a good way. They’re warped by forces only the obsessively devout can understand. Look too deeply into them and all you can see is the stolid brick Catholic church in Milledgeville.