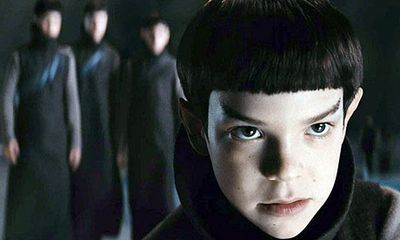 The new Star Trek movie won’t be released for another month, but Trekkies are already abuzz over the new film, based on one full screening in Austin and Internet publicity snippets. Ben Child, writing in the Guardian’s film blog, casts a skeptical eye on the early reviews from Trekkies. Child digs up an old review by Harry Knowles of Ain’t It Cool News of Star Wars Episode II: Attack of the Clone. Knowles was the first to see the film, and he praised the film as the best Star Wars film made to that date. Now the film is considered even by the Star Wars cult as one of the franchise’s weakest installments.

Undeterred, Knowles published a 4,535-word review of the new Star Trek film, complete with gushing praise, much of it in all caps, and photos of his hand-painted model of the Starship Enterprise. Child’s point is that fanboys can let their worship of certain cult films cloud their judgment, and that the rest of us should take the lavish praise for the new Star Trek film “with a rather large pinch of salt.”

Sci fi film lovers are not the most faithful and least discriminating of genre fans. That title goes to horror film fans. In fact, sci fi fans have the reputation in Hollywood for being exasperatingly fickle and unpredictable. The “reboot” of the Star Trek franchise, directed by J.J. Abrams, represents a considerable gamble by Paramount, despite the early positive notices.

Loaded with special effects, sci fi films are expensive gambles. From what I’ve seen of the film, Star Trek XI, as it’s known among Trekkies, hedges its bets by borrowing heavily from Star Wars, particularly its paternalistic, and highly Oedipal, themes. The film covers the period before the television series, giving the producers license to introduce some of the scruffy energy of the first Star Wars film.

Not only is the franchise reset with Abrams’ Star Trek, but the characters are, too. Perhaps there is enough in the film to allow the re-mixing of identity along collective lines that distinguish cult films from merely popular movies. But for someone outside the cult, the film’s familiar template of Oedipal struggles in outer space misses the appeal of the original TV series: the romance and utopian aspirations of the early American space program. The spit-and-polish formality of the series has been replaced by jaunty ruffians casually dropping onto remote planets with all the curiosity and wonder of UPS drivers making their rounds.  The new film presents the iconic characters as their younger selves, which, in the case of Abrams’ film, means bland actors scrubbed clean of the character-filled faces of William Shatner, Leonard Nimoy and the rest of the original cast. The allure of a cult film is in the details, and, from what I’ve seen, the forthcoming installment doesn’t get them right.

Of course, Trekkies may see things differently. A major appeal of cult films is their obsessive return to origins, to a purer state of being before something else–crass outsiders, the disappointments that come with experience–intervenes. So maybe returning to the days when James Kirk was an alienated youth will rejuvenate the Star Trek franchise and energize the Trekkie cult again. Or maybe Kirk’s youth, like ours, is gone forever.