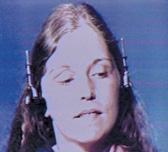 Tonight Chris Hill of the Video Data Bank will host screenings from the VDB’s collection of experimental and activist videos from the 1970s at the Gene Siskel Film Center as part of its series Conversations at the Edge. Video from this period may seem crude compared to contemporary digital multimedia texts, but the decade was a critical point in the history of visual media. The dominant medium of the century was supposed to be visual technologies–first cinema, then television–but by the 1970s film and TV had neither penetrated the culture to the extent analysts thought they would, and both were in something of a creative funk. Modernism in film had run its course, and high production value television fattened corporate coffers while doing little to create anything genuinely new. The 1970s were also a period when philosophers and cultural theorists recognized that language–old-fashioned words–were at the center of everything.

This tension between a supposedly dominant media technologies floundering and the centrality of written and spoken language can be seen in Vito Acconci’s The Red Tapes (1976). (Here is Part One. Part Two will screen tonight.) The video is boring and language-centric. It recreates the boredom of watching the whole flow of television by stripping out the mesmerizing images and leaving words just floating out there, as incantatory by themselves as television images.