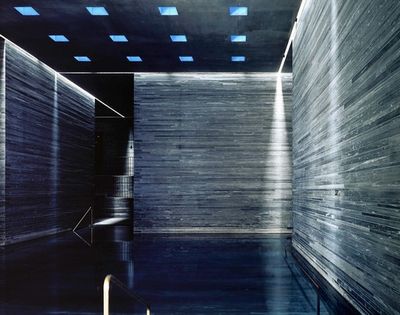 Like a lot of other people, I would imagine, I expected a well-known architect to be named this year’s winner of the Pritzker Prize. An already famous winner would have validated the architectural practices of the last decade, asserting that ambitious, large-scale building projects should be the norm, not a temporary aberration of fat times. Say what you want about the starchitect phenomenon, it raised the profile of the profession and created a lot of jobs.

Instead, this year’s Pritzker went to an Alpine monk of unquestioned artistic integrity. Peter Zumthor combines old-fashioned artisan values (he apprenticed as a cabinet maker) and modernist forms. He’s not well known beyond European architectural circles because of the hermeticism of his practice, just 20 people working in a small Swiss village. There’s something deeply private about his buildings as well. Frank Gehry and Norman Foster design for global travelers. Zumthor’s buildings, for the most part, are designed to be accessed by people only a short car drive away. His most famous structure, the baths at the Hotel Therme in Vals, Switzerland, caters to travelers, but only those seeking to escape, not to assimilate.

The Therme baths have a travel brochure otherworldliness about them. They evince classical decadence spiffed up with Swiss rectitude. Take a look at this YouTube video; the building has such solemn grace that middle-aged bodies appear noble. However, some of his other works don’t necessarily photograph well. (This is no small consideration. Photography is the medium by which we experience most of the finest examples of the art form, just as we experience most music through recordings.) The virtues of his Kolumba Art Museum in Cologne, Germany, another exercise in combining the very old with the very new, aren’t immediately apparent in its photographs. His Field Chapel to St. Nikolaus von der Flüe testifies to the artisanal qualities of his buildings, but, again, in photographs the finished building seems claustrophobic and heavy-handed. Then again, in person the chapel could very well be an elegant cloister. Perhaps he’s more of a tactile architect than a visual one, which would make him very unusual indeed.

Looking over a wide sample of his work, Zumthor seems to be a serious-minded designer of profound spaces. (Blair Kamin has a better slideshow than the New York Times. And here Kamin interviews the architect standing on a mountaintop chatting on a cell phone.) If the Pritzker Award is anything like the Academy Award for Best Picture, the award committee chooses architects whose work represent how the profession wants to be seen by its customers. In this case, the choice of Zumthor makes perfect sense. But this isn’t to say that all architects should now retreat to the mountains and accept only those commissions that would allow their talents to display themselves fully. There’s another side to architecture as well: one that’s engaged with the messy, contentious realities of urban life.

For more on Zumthor, read Edward Lifson’s interview with the architect.