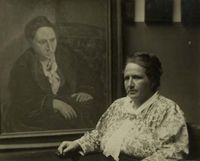 The terrific critic and scholar Elaine Showalter talks to The Chronicle Review about her latest book, A Jury of Her Peers: American Women Writers from Anne Bradstreet to Annie Proulx

. Showalter has an interesting response to a throwaway question about the most overrated women writers. She immediately offers Gertrude Stein. “She played an important role in the development of modernism, but she
played it for men. And she is just not readable. She became viewed as a ‘sister’: That doesn’t sanctify her work. We can criticize it.”

Stein and Alice B. Toklas were the den mothers of the expatriate artist community in 1920s Paris. Hemingway, for one, probably would have been lost without her. But her work neither entertains nor enlightens–which is odd, because in the abstract she actually had some good ideas about writing, and she certainly understood what was going on around her. But Tender Buttons is perhaps the least read of the major modernist literary works. Perhaps the most enduring contribution the two made to Western culture: the recipe for scrambled eggs in The Alice B.Toklas Cookbook

. I still use Toklas’s low and slow approach to making scrambled eggs. I highly recommend it.